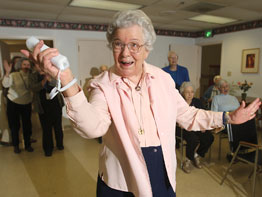 The last time Mercy Sister Lois Mueller picked up a bowling ball was 1932, but you couldn’t tell that from the way the 93-year-old Baltimore native knocked over pins left and right at The Villa retirement home for religious sisters Feb. 23.

The ball was an electronic one that Sister Lois flung toward a large video screen loaded with white and red-striped targets. Sister Lois used a small hand-held controller as she played the Nintendo Wii video game along with 10 other sisters in a nearly daylong session of marathon virtual bowling.

When the white-haired senior smacked down two stubborn pins to claim a hard-fought spare, the room erupted into cheers and applause.

Beaming and laughing, Sister Lois threw her hands in the air in triumph. Now she was ready to go for a strike.

“Oh my goodness,” she said as she handed the controller to another eager player. “We’re working on getting more than spares!”

A Christmas gift from students at St. Joseph School in Cockeysville, the Wii video game system is quickly becoming a big hit at the Baltimore retirement facility. The popular game uses wireless technology that allows a player’s motions to control the actions of the characters on the screen.

The sisters have had three group play sessions with the game and are making plans to form teams and schedule more contests.

“The more we keep moving, the better it is,” said Sister Lois, a spry woman who wore a bright pink blouse and matching sweater.

Sister Helen Hiehle, an 87-year-old Mission Helper of the Sacred Heart, said her voice gets as much exercise as her body during the boisterous Wii matches.

“I think it’s so much fun that we can scream and yell and have a good time,” said Sister Helen, who played the game from a wheelchair using the same sweeping arm motions as any real-life bowler. “It really gets me moving!”

Many of the sisters said the best part of playing Wii is the camaraderie.

“You see how tremendously supportive we are of one another, right?” Sister Lois said. “It’s so wonderful. It reminds me how my vocation has brought so many joys to my life.”

Carol Zaicko, administrator of The Villa, said the video game lifts the spirits of everyone who plays. Even sisters with dementia get in on the action, she said.

“Bowling is something familiar to them and they can understand it and still get exercise,” Ms. Zaicko said. “We always have staff members available to assist anyone who needs help.”

Amid all the Wii-mote action, it became evident the sisters weren’t keeping score.

“It’s all about having fun,” Sister Helen said with a grin.