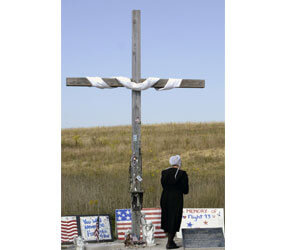 HOLLIDAYSBURG, Pa. – In the minutes, hours and days immediately following the Sept. 11, 2001, terrorist attacks against the United States, Bishop Joseph V. Adamec was gratified to see people turning to God and praying together as they sought to make sense of the tragedy.

Because the tragedy hit home in the Diocese of Altoona-Johnstown, with United Flight 93 crashing in Shanksville in rural Somerset County, the bishop who retired earlier this year was quick to underline the message that God had shown special care for the people of west-central Pennsylvania.

“The plane flew over Johnstown and over other communities in our area,” he said in an Aug.31 interview at the Diocesan Administration Center in Hollidaysburg. “It could have crashed into any one of those towns. The plane could have crashed into a home, or on a car on Route 219. But it didn’t. It crashed in an empty field. I don’t believe that was just a coincidence. When God is in charge, nothing is coincidental.”

Like many people in the eight-county diocese, Bishop Adamec thought the first reports of a terrorist attack involved only places at some distance away from the Allegheny Mountains. But soon after learning of what was happening in New York and outside Washington, Bishop Adamec, who headed the diocese for nearly 24 years, found out that rural Pennsylvania was not beyond the reach of international terrorists.

“I had walked some guests to their car, and when I came back into the house, my secretary said ‘Come and see what’s happening on television.’ We sat glued, hearing about New York and Washington. Then we heard a local report that Route 219 was closed. That made me wonder what was going on,” Bishop Adamec recalled. “There was some fear and doubt in my mind. I wondered where we fit into what was going on elsewhere. Then I heard that a plane was down in Somerset County.”

Fear and doubt was a common emotion that day, and hundreds of people sought refuge from their fears by joining Bishop Adamec for Mass at the Cathedral of the Blessed Sacrament in Altoona that evening.

But, Bishop Adamec went on, “there comes a day when fear passes. We forget. We think that we can go it alone. We need to pray always, to approach God often.

“Do we need another disaster to remind us that that’s the case?” he asked. “It would be unfortunate if that’s the only thing that brings us to God.”

Bishop Adamec recalled that just over 10 months after the crash of Flight 93, Somerset County was again in the international spotlight when nine miners were trapped underground for over 78 hours, from July 24-28, 2002, when the Quecreek Mine flooded.

“I spoke to some of those miners after they were rescued,” Bishop Adamec said, “and they told me, ‘There weren’t nine of us down there. There were 10 of us.’ They believed that God’s angel was with them. They felt God’s presence supporting them.”

He continued, “We have these blessings – we’ve been given these blessings, and our thanks for them should be expressed by our worship; by taking time to pray and to go to church and be with God. We need to work on being a better people than what we sometimes are.”