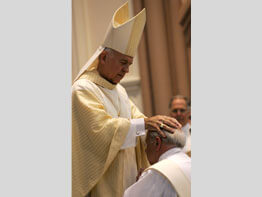 “I’m at the highest point I could ever be,” said Father David T. Link, on the day of his ordination at Holy Angels Cathedral in Gary. “I know the Holy Spirit and my wife, Barbara, are here with me.”

On what the bishop of Gary called a “day of great joy and jubilation” for his diocese, the prelate introduced the region’s three newest priests, Fathers Link, Michael “Mick” Kopil and Richard “Rick” Holy.

A father of five and grandfather of 13, Father Link is dean emeritus of the University of Notre Dame Law School. His wife of 45 years died in 2003.

The new priest began teaching at Notre Dame in 1970 and was law school dean from 1975 to 1999. Following the death of his wife, he returned to the classroom for seminary studies at Sacred Heart School of Theology in Hales Corners, Wis., which specializes in later-in-life vocations.

The priesthood “fits him,” said Elena Esparza, 18, one of his grandchildren. “We all figured he found something he loves doing.”

A man who spent much of his life training future attorneys, Father Link became interested in ministry through his work at Indiana State Prison in Michigan City.

But the former trial lawyer, college professor and international speaker talked about the difference between addressing an audience and celebrating Mass.

“You’re consecrating the body and blood of Christ, that’s a whole different feeling,” Father Link said prior to his ordination. “I’m concerned about saying Mass the right way. I think I’m ready for this.”

The retired law dean began considering a religious vocation after making regular visits to inmates at the state prison. While he enjoyed being a lay volunteer, he said in a Notre Dame alumni newsletter, “as a priest I can go the final step – perform the sacraments, consecrate the Eucharist.”

Father Link also attributed his new vocation to his late wife. Barbara, he said, was the “Michael Jordan of spouses – she always played above the rim and was a great inspiration in whatever I did.”His decision to pursue the priesthood “was her idea,” he said.

Bishop Melczek has assigned Father Link to ministry at the state prison.

“It’s wonderful,” said David C. Link, the priest’s son, noting that prison ministry “has so much meaning for his life. This is the perfect thing for him to do at this time.”

The younger Link and other family members shrugged off the notion that it is strange to have a Catholic priest for a father. “If he had not met my mother and had all of us, he would have been a priest. This feels very natural,” he said.

Mary Esparza, another of the priest’s children, added, “I’m really happy for my dad and proud. He’s always served in ministry to everybody. After my mom died, this was going to be his life’s ministry. Prison ministry is genuine – he feels at home there.”

At a social gathering following the ordination, the three new priests greeted, thanked, and blessed many of the people whose lives they’ve already touched, including parishioners, school children and family members. For Father Link, that included members of his Notre Dame family.

Regarding his ministry to prisoners, he noted that “these people have serious problems in their lives. They have a very, very different family structure, and they’ve made mistakes.”

Nonetheless, Father Link said, prisoners “need to be treated with a great deal of human dignity. The challenge is to make sure I can play my role as minister. I need to bring them hope, knowledge of eternal life, and I love that.”