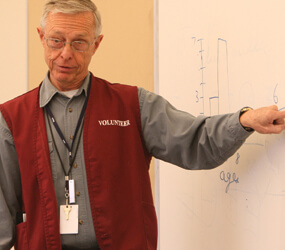 When Ed Sommerfeldt stepped down in 2007 after nearly four decades as a computer science and mathematics professor at Coppin State University in Baltimore, he could have devoted his retirement to going on cruises. That just wasn’t in him.

“I couldn’t imagine a worse fate,” the 72-year-old said with a laugh.

Instead, the parishioner of St. Matthew in Northwood signed up with the Baltimore-based Ignatian Volunteer Corps and began teaching basic math to people seeking their GEDs at Christopher’s Place, a Catholic Charities-run outreach located at Our Daily Bread Employment Center in Baltimore.

Four days a week, Sommerfeldt slips on his maroon volunteer’s vest and stands in front of a classroom that attracts as few as two or three students or as many as 15 or more. Most of those who sit in front of him are formerly homeless men who reside at Christopher’s Place, but there are also people who come in off the streets.

On a recent morning, Sommerfeldt gave a lesson on how to figure means and averages. Learning long ago never to take anything for granted, he gave very detailed instructions – going so far as to walk students step-by-step on the keystrokes on their calculators.

Sommerfeldt acknowledged that his job can sometimes be frustrating. He never knows if students will stay in the class, he said, and it’s common for them to disappear for long stretches before returning.

“Some of them get scared off because they’ve been out of school for so long,” said Sommerfeldt, who constantly encourages his students. “I had one guy tell me he was 53 and had been frying his brain with drugs for 35 years. He didn’t think he could learn.”

Despite the challenges, Sommerfeldt said he receives more than what he gives. He believes his spiritual life has grown more in the last three years than all the other decades of his life.

“A lot of prayer for me is thinking about the folks I work with,” said Sommerfeldt, who has also volunteered at Cristo Rey Jesuit High School in Fells Point. “I see Christ in these folks. I see God in fractions, means and medians. It’s all part of creation.”

Through the Ignatian Volunteer Corps, Sommerfeldt discusses the theological dimensions of volunteering and maintains a journal. He is passionate about recruiting more people in the corps and is working to involve some of his neighbors at Oak Crest Village in Parkville.

“There’s a real need,” said Sommerfeldt, who also assists students with their resumes. “It’s obvious that if you don’t have a GED, there’s no chance for decent employment.”

Palmer Webb, a 45-year-old Christopher Place resident, said Sommerfeldt and all the teaching volunteers make a big difference for people like himself who are trying to turn their lives around.

“I think they’re great,” Webb said. “They take the time to help you learn – from fractions all the way up to algebra.”