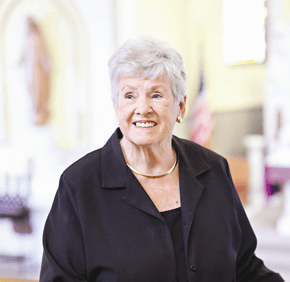 By Renee Newberry
Special to the Review
BRADSHAW – Margaret Muller found her calling at age 10 and never looked back.
Sixty-eight years later, the beloved cantor of St. Stephen, Bradshaw, has left the building. She still attends 7 a.m. Mass every morning, but her songbird solos have been relegated to her piano at home.
“I love to sing, but I was getting tired,” Muller said with a smile.
The recently retired cantor is enjoying the freedom to begin cooking in the kitchen at 4 p.m. on a Saturday when she would have previously had to be at church to sing for the next Mass.
“I’m just happy I could sing as long as I could,” she said, “and people have told me with my hymns at meditation, I created a spiritual atmosphere, and that pleased me more than anything as I got older.”
Of the awakening of her talent almost seven decades ago at St. Joseph School in Fullerton, Muller said she sings “because Sister (Margaret Mary Matthews, the children’s choir director) told me to, and I could. I wouldn’t be the same person I am today (if I hadn’t).”
Muller’s singing with the children’s choir began after her fifth-grade teacher, Sister Lambert, heard the 10-year-old Muller share a new song – “Paper Doll,” by the Mills Brothers – in class one day. Sister Lambert sent her directly to Sister Margaret Mary.
“The first time I sang was Immaculate Conception, Dec. 8, (1943), and then I sang at Christmas,” she said. “That following spring, I sang the whole Mass by myself for a first Communion.”
Muller recalls practicing with her sisters on the walk to and from church, including funeral songs.
“Requiems, Latin,” she explained. “We used to walk through the woods. We lived a mile-and-a-half away, and at those times, funeral Masses were at 6:00 in the morning.”
Before she went on to sing at St. Clement Mary Hofbauer, Rosedale, in the 1960s, Muller sang at weddings at St. Stephen, including one in 1956 for the parents of Rob Hott, now the music director there.
Hott said he has “recordings of Margaret from 1977 when my sister was married, and her voice doesn’t ever really change. That’s remarkable for a vocalist.”
The music director said he and Muller were frequently on the same wavelength.
“We would come in the morning of Mass,” he said. “I would say, ‘How about “Wherever He Leads I’ll Go”?’ and she’d say, ‘I was thinking the same thing.’ Margaret had such a large repertory of music and was able to fit pieces to the season so well, and it was always something so appropriate to be sung.”
Father Lawrence Kolson, pastor of St. Stephen, said when Muller was the scheduled cantor, he always felt secure with the Mass.
“I miss her,” he said. “We used to call her ‘The Voice.’ ”
Her deep love of singing made it difficult to pinpoint just one song she enjoyed most.
“The one I really like was John Jacob Niles’ ‘Jesus, Jesus, Rest Your Head,’ which I did this Christmas when I left,” Muller said. “I loved doing a patriotic (song) … ‘Battle Hymn of the Republic’ and ‘America the Beautiful.’ ”
Both she and Hott noted her annual rendition of “God Bless America” on Thanksgiving Day. Then there were “O Divine Redeemer” with former choir director Mary Bobbin, and a “very, very dramatic” performance of “Celebrate Life!” also with Bobbin.
The two have remained friends since Bobbin’s retirement in the mid-1980s.
Bobbin said Muller was “a pleasure to work with. She was always willing to share her talent, her love of the Lord. She devoted her life to praising God in song.”
Muller thanks God for allowing her to sing and the church and people for the gift of her ministry.
“Our whole lives growing up was the church,” Muller said. “We didn’t do anything outside of the church, go to dances like my younger sisters did. We did CYO, and we did plays, and church was your whole life in those days, a continuation of what you’ve always done.
“I never thought to do anything else. I was quite happy.”
Copyright (c) May 4, 2012 CatholicReview.org
PrevNext