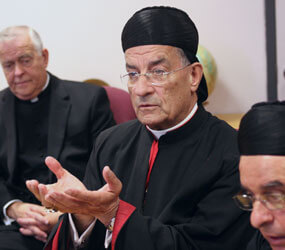 Patriarch Rai said the “Arab spring” movement holds much promise, but its leaders must “adopt a separation between religion and state.” He said such a system exists in his native Lebanon and “respects all religions and all values of each religion.”

“We wish to see freedom practiced in those countries. We wish to see the values of human rights and democracy implemented,” he told a news conference Oct. 20 at the New York headquarters of the Catholic Near East Welfare Association, a pontifical agency that supports the Catholic Church in the Middle East, North Africa, India and Eastern Europe.

“It’s not easy to talk about democracy in the Western sense in countries that have a theocratic system. Christianity divides politics and religion, and we wish Islam and other religions to do the same,” Patriarch Rai said.

Failure to do so will result in civil wars, such as the one in Iraq, he warned, and will lead to the rise of regimes “that are even more fundamentalist. This is something that will be to the detriment of everybody.”

“The Arab-Israeli conflict is at the level of religion and culture. The conflict between the Palestinians and the Israelis is a conflict (about) a people whose sovereignty, whose land, was taken away, who were displaced and for 64 years have been promised by United Nations resolutions a right of return, but this has not happened,” he said.

“In Lebanon, we have suffered from the presence of a half million Palestinian refugees, and the war in Lebanon in 1975 started with the Palestinians,” he added.

He said the conflict led to injustice, oppression and the rise of fundamentalist movements in the region.

“The atmosphere that was created by those conflicts has impacted the Christian presence in the Middle East, causing some to leave for economic and security reasons,” he said.

Speaking about Israel, Patriarch Rai said, “In this day and age of globalization, it is strange to see a nation that wants to be for one religion or one race because, automatically, you are excluding the others.”

“There will be no peace in that part of the world until Judaism, Islam and Christianity separate church and state,” he said.

Patriarch Rai said tolerance of Christians in the Middle East falls into three categories. In some countries, they have no rights to establish a church or maintain a presence. In other countries, such as Egypt, the church exists and Christians can worship, but religious life is difficult and there are restrictions on construction and repair of churches. The third category covers places where Christians live freely and are accepted, but freedom of conscience is not respected and people do not have the right to change religions.

Patriarch Rai stressed that Christians are not outsiders in the Middle East and were established there “and impacted society with their values” 600 years before Islam. They have contributed positively to their countries and should not be made scapegoats in any area.

He said the international community has a responsibility to limit the spread of fundamentalism in the world and encourage moderate people to take the lead in countries of the Middle East.

“The very large part of Islam is moderate,” he added.

He said the church does “not side with any government or regime,” but asks whoever is in power to respect the rights of the people and guarantee freedom of speech, religion and conscience.

Patriarch Rai said that in Lebanon, 18 distinct religious groups live together, “not in ghettoes.” He said Lebanon is a sign of hope for peoples of the region, and “the church in Lebanon is considered a guarantee for the Christian presence for that part of the world.”

Patriarch Rai, 71, was elected March 25 as the leader of the Lebanon-based Maronite church, which is the largest of the six Eastern Catholic patriarchal churches with an estimated 13.3 million members.

Since his installation, he has traveled throughout Lebanon, meeting Catholics, Muslims, Orthodox and Protestants. He described spontaneous gatherings of people of many faiths, carrying placards referring to him as the patriach of national unity and of political reconciliation.