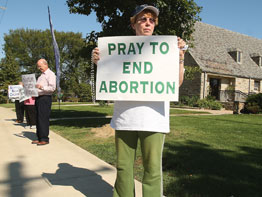 On a day Catholics throughout the archdiocese showed their support for the sanctity of human life with special Masses and prayer vigils, Archbishop Edwin F. O’Brien called on legislators to protect innocent life.

“To our elected officials who value innocent human life in the womb, a reminder and a plea: there are any number of ways within our Constitution to advance the protection of innocent human life,” said Archbishop O’Brien, speaking during Mass at the Cathedral of Mary Our Queen in Homeland on Oct. 5, Respect Life Sunday.

“Is it not reasonable and honorable to take some steps,” he asked, “however small, to pursue that goal?”

The archbishop said it is “unfortunate that the prolife movement comes across to some as angry, reproachful or excessively judgmental.” He praised the work of prolife volunteers who reach out to women in crisis pregnancies and thanked them for their “boundless energy in bringing to life and keeping alive the creed at the heart of our nation’s identity – that all of us are created equal and endowed by our creator with the inalienable right to life.”

Archbishop O’Brien said it was “unfortunate” that some politicians and commentators have “distorted” the church’s teachings on abortion in recent weeks. He quoted from the Didache, the earliest book of Christian instruction, which he described as “very possibly written as the New Testament was being formed.”

“It speaks of the two ways of life and death and admonishes, ‘Thou shalt not procure an abortion, nor commit infanticide,’” said Archbishop O’Brien. “This solemn teaching has never been in doubt since those earliest days.”

During the liturgy, Archbishop O’Brien presented the archdiocesan Culture of Life Medal of Honor to Vincent J. Perticone, a parishioner of St. Joseph in Taneytown who has volunteered for more than 20 years in the prolife movement.

Mr. Perticone, who could not attend, will receive the award Oct. 19 at St. Joseph in Taneytown, his home parish.

“The purpose is to spread the word that no woman should feel that her only choice is abortion,” said Nancy Paltell, associate director for respect life with the Maryland Catholic Conference.

“How tragic would it be if a woman comes to a pregnancy center for help and she can’t get it because it’s not open,” she said.

In conjunction with Respect Life Sunday, parishioners throughout the archdiocese participated in Respect Life Chains – standing together in support of life.

The effort will include 26 days of Eucharistic adoration dedicated to the cause, 871 hours of prayer vigil at abortion clinics and 2,100 hours of liturgical events or private prayer.