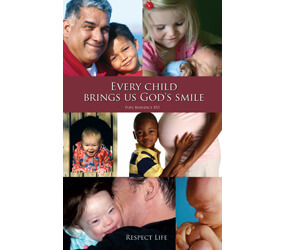 WASHINGTON –“Every Child Brings Us God’s Smile” is the theme for the 2009-2010 Respect Life program, based on one of Pope Benedict XVI’s homilies during the feast of the Baptism of the Lord.

Although the Respect Life program itself has been a year-round initiative since its establishment in 1972, U.S. Catholics across the country have used the month of October to focus on life and human dignity. Many parishes will hold a special Respect Life Mass Oct. 4, the first Sunday of Respect Life Month.

Materials are developed for the Respect Life program each year by the U.S. Conference of Catholic Bishops’ Secretariat of Pro-Life Activities. The topics addressed this year show the diversity of pro-life concerns, including:

– “Why You Matter: A Reflection on Human Dignity” by Father John Bartunek, a member of the Legionaries of Christ.

– “The Difference Is the Difference: Sexual Difference and the Defense of Marriage” by Father J. Brian Bransfield, assistant general secretary of the USCCB.

– “Contraception: The Fine Print” by Susan E. Wills, assistant director for education and outreach in the pro-life secretariat.

– “Where Do We Go From Here? The Challenge of Building a Culture of Life” by Cardinal Justin Rigali of Philadelphia, chairman of the USCCB Committee on Pro-Life Activities.

The 2009-2010 Respect Life packet also includes a collection of suggested prayers for Respect Life Sunday, a “Litany to Mary, Mother of Life,” a novena to Our Lady of Guadalupe and a Holy Hour for life, as well as suggested preaching reflections for Jan. 22, the anniversary of Roe v. Wade, the U.S. Supreme Court decision that legalized abortion.

The folder also includes information on how to order supplies for this year’s program and a CD with additional literature on the selected issues. Many supplies are available in both Spanish and English.