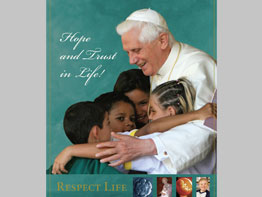 A movement that had a modest start in Texas four years ago is being utilized by the Archdiocese of Baltimore to advance its Respect Life program.

More than 30 parishes in the archdiocese will participate in 40 Days For Life, which, according to its Web site, uses prayer and fasting, constant vigil and community outreach to draw attention to the evil of abortion.

More than 30 parishes in the archdiocese have committed to participate in 40 Days For Life, a national movement that began in 2004 in Bryan-College Station, Texas.

“As of Sept. 16, we had 32 parishes signed up for 40 Days For Life,” said Linda Brenegan, the director of the archdiocese’s Respect Life program. “That’s only the ones we’ve heard from.

“The goal is to have prayers said continuously in the archdiocese for at least 12 hours each day, from 7:30 a.m. through 7:30 p.m. Prayers said anywhere are efficacious, but those said in front of an abortion clinic have an added effect.”

While 40 Days For Life began Sept. 24 and continues through Nov. 2, its archdiocesan effort began Sept. 19 in Frederick, where Ms. Brenegan was the master of ceremonies at an event that honored Nellie J. Gray, one of the organizers of the first March for Life in Washington, D.C., in Jan. 1974.

On behalf of the archdiocese and Archbishop Edwin F. O’Brien, Ms. Gray received the 2008 Culture of Life Medal of Honor, which recognizes “outstanding service by Catholics who have made a significant contribution in fostering understanding and respect for the dignity of each human being as created in the image and likeness of God.”

Archbishop O’Brien will officially announce another Culture of Life Medal of Honor winner at the Respect Life Sunday Mass Oct. 5 at 11 a.m., at the Cathedral of Mary Our Queen, Homeland.

“We focus on the importance of all life issues,” Mrs. Brenegan said of a program that emanates from Respect Life Sunday, “from abortion to embryonic stem-cell issues to euthanasia. The impact of abortion on men and women, the grief they suffer, there are many factors we need to consider.”

The theme of this year’s Respect Life program, as outlined by the U.S. Conference of Catholic Bishops, is “Hope and Trust in Life.” Its origin is Pope Benedict XVI’s homily from Dec. 31, when he described the lack of hope and trust as “the ‘obscure’ evil of modern Western society,” and it explores topics that he addressed during his visit to the U.S. last April.

While Respect Life Sunday remains a primary focus for the archdiocese, it figures to be complemented greatly by 40 Days For Life.

The local effort will range from a Nov. 1 baby shower at St. Alphonsus in Baltimore that will benefit the Greater Baltimore Center for Pregnancy Concerns, to an ambitious commitment from St. Mary in Hagerstown.

Mobilizing its parishioners, St. Mary will attempt on its own to meet the archdiocesan challenge of 12 hours of prayer per day. It is continuing its legacy of sidewalk counseling at a nearby clinic where abortions are performed.

“I’ve only been here a few months, and the parish has always had a strong Respect Life committee,” said Father J. Collin Poston, the administrator at St. Mary. “There is a ‘reproductive services’ clinic down the street from us that is used to perform abortions. That’s a large reason why our people act, to demonstrate against this evil.

“The 40 Days For Life movement is another way to keep Respect Life and abortion in people’s minds.”