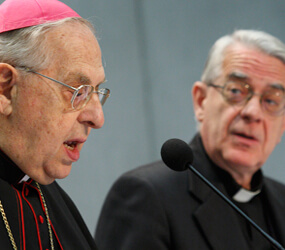 VATICAN CITY – Catholics’ respect for human life and dignity must be clear in the way they welcome migrants and refugees, offer them pastoral care and lobby their governments for fairer treatment of people on the move, Vatican officials said.

Archbishop Antonio Maria Veglio, president of the Pontifical Council for Migrants and Travelers, said globalization is not only an economic phenomenon. It also has an impact on the movement of people, and people must be the focus of Christian attention, he said.

“We know as Christians that life’s core is fundamentally spiritual and that the challenge is how to promote and safeguard every human person,” focusing particularly on the most vulnerable, including migrants who leave home in search of a better life and refugees forced to flee violence or oppression, the archbishop said Nov. 3.

The archbishop spoke at a Vatican press conference previewing the Sixth World Congress on the Pastoral Care of Migrants and Refugees, which his office is convoking Nov. 9-12 at the Vatican.
With globalization the church not only has had to reach out to welcome and assist people on the move, but also to try to address situations that force them to seek a new life away from their homeland as well as attitudes and policies that make it difficult or impossible for them to live with dignity in a new land, Archbishop Veglio said.

Christians are obliged to work with other people of good will to build “a civilization that is worthy of the human person, meaning a life model wherein each person can enjoy legitimate freedom and security; where suffering, discrimination and fear are eliminated to the greatest degree possible; (and) where respect for fundamental human rights – exercised with their corresponding duties – is guaranteed,” he said.

Archbishop Agostino Marchetto, secretary of the council, said the congress would bring together more than 300 representatives of bishops’ conferences, Catholic aid agencies and religious orders to look at how to improve the way Catholics welcome and assist newcomers.

Citizens have a right to be concerned about the security of their homelands, but for Christians security “must always been seen together with welcome – that is the Catholic approach,” Archbishop Marchetto said.

The council secretary said the number of people living outside their homelands is huge: an estimated 200 million migrants in the world and an estimated 11 million refugees who have fled violence or persecution.

“If we said probably 30 percent are Catholic, we probably would not be far off,” Archbishop Marchetto said.

The archbishop said he spent three weeks in the United States recently lecturing at Catholic universities on the obligation to welcome and assist people on the move.

He said the reaction to his talks made clear that many people have “difficulty in accepting migrants, and this was on the part of good Catholics.”