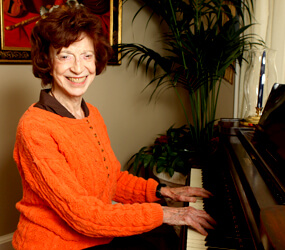 Before deciding which retirement community to call home, Ruth Von Bramer did her homework.

“I’ll tell you what I did,” said the sprightly red-haired native of Kingsport, Tenn. “I sneaked in by playing the piano.

“When I went in to play the piano and entertain them, I was sizing up the place,” she said with a twinkle in her eye.

While those who are 50-plus need not take such stealthy measures – exploring communities to get a feel for them is certainly recommended by experts in the field.

It’s how Von Bramer ultimately settled on Mercy Ridge, a retirement community in Timonium, some two-and-a-half years ago.

“I came here, and they were very receptive to my music,” said Von Bramer, who plays classical and Broadway for residents.

But more important than that was the friendliness of other residents.

Von Bramer simply said “everybody smiled at me.”

She said as soon as she came in the door, they said, “how are you?”

“I couldn’t believe it,” she said. “They didn’t know me from Adam.”

Von Bramer, who taught vocal music in Baltimore County for 30 years and retired some 20 years ago, decided to investigate retirement communities after she experienced some significant health problems with her eyes.

In addition to visiting four communities here, she visited sites in Tennessee and Virginia.

Of the factors she considered, money was certainly high on the list.

“If they were beyond my finances, then I didn’t even bother to look at them,” she said.

Food, people and activities were other important considerations.

“I looked over the place at the Christmas holidays, and it was fixed so beautiful,” she said. “I went by the pub – they have a pub here, you know – and residents go in and have a glass of wine or beer or whatever, and they chat and they have the best time.

“Just because you’re getting old doesn’t mean you can’t have fun,” she said.

Engaged in swimming, ballroom dancing, chorus and piano playing, Von Bramer has found time to incorporate all her activities.

“I love to swim, and I knew that if I couldn’t swim, I would be very unhappy,” Von Bramer said, noting that Mercy Ridge has a pool.

She is also able to practice her Catholic faith.

“They have a beautiful chapel, and I’m a practicing Catholic, and we have Mass here quite frequently,” she said, noting that Monsignor George B. Moeller, retired pastor of St. Joseph, Fullerton, celebrates Mass.

Food was also an important consideration.

Von Bramer has celiac disease, which means she cannot have any gluten.

“They accommodate me with my diet and the food is very good here,” she said, noting that there are 15 different flavors of ice cream.

According to Patty Yingling, marketing director for Mercy Ridge, there are 520 residents in independent living. Assisted living and nursing home facilities are also available should residents eventually need that level of care.

That was something Von Bramer found reassuring.

When asked what advice she would give other people who are 50-plus and considering such a move, she said that they should realize that they are probably going to spend the rest of their years.

“Spend the night and see if you’d like to have it your home for the rest of your life,” she said. “See if you like the surroundings and the people. I know it’s hard to make your mind up after staying just one night, but you can have an idea.”

She encourages planning ahead, as she was put on a waiting list for an apartment and noted that moving isn’t easy.

“It does take a lot of doings to move,” she said, “and it’s a very painful thing to do.”

She said “it’s a pain-in-the-neck to get rid of stuff.”

“Your whole life kind of changes,” she said.

She said people should begin looking into moving in their 70s and early 80s.