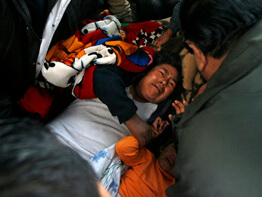 LIMA, Peru – Rescue workers searched the rubble of houses about 100 miles south of Peru’s capital city, Lima, in search of victims and survivors of a magnitude 7.9 earthquake that struck Aug. 15 at 6:40 p.m.
Officials reported at least 337 people killed and more than 1,000 injured, but the figures were expected to rise.
Most of the damage, deaths and injuries occurred in towns on the south coast nearest the epicenter, particularly in Pisco, Ica and Chincha, where adobe houses collapsed. At least 200 deaths were confirmed in Pisco, and there were reports of cadavers in the streets as families awaited ambulances or other emergency assistance.
In an interview on Peru’s state-run television station, Archbishop Hector Cabrejos Vidarte of Trujillo, president of the Peruvian bishops’ conference, appealed for donations of nonperishable food, blankets, medicine and water for the victims of the disaster and urged people to refrain from looting.
Immediately after the quake, there were reports of looting in Ica, where electricity service had been cut.
Many families spent the night in the streets or parks for fear of further damage from a series of aftershocks. The U.S. Geological Survey reported at least 11 aftershocks that measured at least magnitude 5, including three measuring more than magnitude 6.
Fissures opened in the Panamerican Highway and a bridge near Ica collapsed. There were blackouts in the most-affected areas and scattered power outages in Lima, where some buildings were damaged. People tried in vain to contact relatives as telephone systems were overwhelmed immediately after the earthquake.
Churches in Pisco, Ica, Chincha and Canete were reported damaged; those damaged included the sanctuary housing the image of the Lord of Luren, the site of a popular religious devotion.
Archbishop Cabrejos thanked Pope Benedict XVI for the message of solidarity released by the Vatican after the earthquake. In a telegram sent to the bishops of the affected dioceses, the Vatican’s secretary of state, Cardinal Tarcisio Bertone, said the pope was deeply saddened upon hearing the news of the quake.
The Vatican released a copy of the telegram Aug. 16.
The pope offered his prayers and condolences for all those affected by the quake and urged “institutions and people of good will to offer the needed aid to victims out of charity and a spirit of Christian solidarity.”
In a televised message to the nation several hours after the earthquake, President Alan Garcia called for people to remain calm and expressed condolences to the families of the victims. He ordered military and police hospitals to open their doors to anyone requiring medical assistance.
Garcia also noted the collapse of the telephone system and said he would call a meeting of the country’s telephone service providers to explain why service failed.