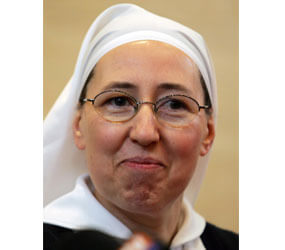 VATICAN CITY – A presumed miracle needed for the beatification of the late Pope John Paul II reportedly has reached the final stages of approval.

The miracle – involving a French nun said to have been cured of Parkinson’s disease – has been approved by a Vatican medical board and a group of theologians and is now awaiting judgment from the members of the Congregation for Saints’ Causes, according to Italian journalist Andrea Tornielli.

If the congregation accepts the healing as a miracle attributable to the late pope’s intercession, then Pope Benedict XVI still would have to sign a decree formally recognizing it before a beatification ceremony can be scheduled.

Tornielli, who covers the Vatican for the newspaper Il Giornale, wrote Jan. 4 that the process is so far advanced that Pope John Paul could be beatified sometime in 2011.

Jesuit Father Federico Lombardi, the Vatican spokesman, told Catholic News Service Jan. 4 that the final step before beatification requires the pope’s approval and that the pope is free to make his own decision on the matter.

According to Tornielli, at the end of 2010, the presumed miracle passed the first three stages in a five-step process that involves medical experts, a medical board, theological consultants, the members of the congregation and, finally, Pope Benedict.

In 2005, Pope Benedict set Pope John Paul on the fast track to beatification by waiving the normal five-year waiting period for the introduction of his sainthood cause.

The initial diocesan phase of the cause was completed in April 2007. After a team of theological consultants to the Congregation for Saints’ Causes studied the 2,000-page “positio,” the document that makes the case for beatification, Pope Benedict formally decreed in December 2009 that Pope John Paul had heroically lived the Christian virtues and was venerable.