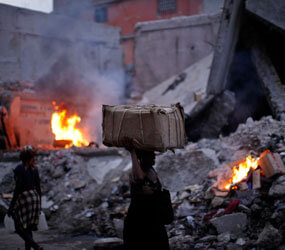 WASHINGTON – The United States should liberalize immigration policies for Haitians and work harder at reconstruction in Haiti and toward finding permanent family solutions for orphans, said a report from bishops and others who visited the region recently as part of a delegation from the U.S. Conference of Catholic Bishops and its affiliated agencies.

In a Sept. 27 teleconference, Miami Archbishop Thomas G. Wenski said that international attention has begun to lag with regard to the long-term recovery of Haiti from the Jan. 12 earthquake that devastated the impoverished island nation.

A 16-page report, “The Displaced of Haiti: Long-Term Challenges and Needed Solutions,” detailed problems and recommendations for Haiti and its neighboring countries, the Dominican Republic and the Bahamas, for dealing with the painfully slow process of rebuilding Haiti and helping its displaced people.

“The situation in Haiti is a desperate one,” concluded the report. “With the reconstruction moving slowly, Haitian families and children live in dangerous circumstances. It is vital that the international community renew its efforts to get the country moving again, with both additional resources and help in overseeing and sustaining the reconstruction and development efforts.”

The report detailed still unmoved mountains of debris from destroyed buildings; the challenges facing 1.5 million people who are still homeless, many living in the 1,300 tent camps set up as temporary shelter; and ongoing shortages of services, with a majority of schools and hospitals destroyed in the capital city, Port-au-Prince.

It noted that a third of Haiti’s civil servants were killed in the quake, so government functions have been particularly slow to recover.

Archbishop Wenski said the government lacks the heavy equipment needed to remove the massive piles of debris, while the capital’s main port doesn’t have the capacity to handle shipments that could facilitate the cleanup.

The report noted that tent camps remain unstable and frequently dangerous, with reports of nightly attacks on women, robberies and assaults a common occurrence.

“Perhaps most disturbing to the delegation was the situation of Haiti’s children,” the report read, “separated children, orphans, and children abandoned by parents unable to care for them. Thousands of Haitian children either without parents or without the care of a parent live in hundreds of ‘orphanages’ or ‘child-care centers’ in and around Port-au-Prince.”

The number of children in orphanages apparently continues to grow as parents who cannot care for them leave their children,” it said.

Archbishop Wenski was accompanied on the July 24-Aug. 2 trip to the region by Bishop Nicholas DiMarzio of Brooklyn, N.Y., and staff members from the Catholic Legal Immigration Network, Catholic Relief Services, Migration and Refugee Services, and the USCCB international policy office.

Among the recommendations of their report:

– Efforts to trace families of orphans or unaccompanied children must be increased and the best interests of those children should be used to decide how they will be handled.

– Increased efforts should be made to protect women and children along the Haitian-Dominican Republic border to minimize human trafficking.

– The Dominican Republic and the Bahamas should cease deporting Haitians until recovery and reconstruction of their country progresses or they can be provided new homes.