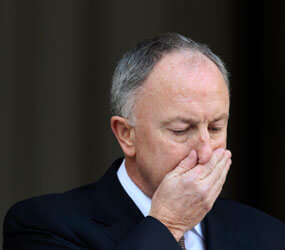 DUBLIN, Ireland — A report detailing failures of church leaders’ handling of sex abuse cases in the Archdiocese of Dublin has resulted in calls for bishops’ resignations and further investigations and prosecution.

“The Dublin Archdiocese’s preoccupations in dealing with cases of child sexual abuse, at least until the mid-1990s, were the maintenance of secrecy, the avoidance of scandal, the protection of the reputation of the church, and the preservation of its assets,” said the report by the independent Commission of Investigation, headed by Judge Yvonne Murphy. “All other considerations, including the welfare of children and justice for victims, were subordinated to these priorities. The archdiocese did not implement its own canon law rules and did its best to avoid any application of the law of the state.”

The report said church officials and police colluded in covering up instances of child sexual abuse by clergy.

The commission investigated the period from January 1975 to May 2004, during which time there were four Dublin archbishops: the late John Charles McQuaid, Dermot J. Ryan and Kevin McNamara and Cardinal Desmond Connell, who retired in 2004 and is now 83.

More than two-thirds of the 325 complaints evaluated by the commission were made during the 1990s and 2000s. Cardinal Connell served as archbishop from 1988-2004. As of Nov. 30 he had made no comment on the report.

The report emphasized that the commission was established not to determine where child sexual abuse took place “but rather to record the manner in which complaints were dealt with by church and state authorities.”

“It is also important in the commission’s view not to equate the number of complaints with the actual instances of child sexual abuse,” the report said. “Of those investigated by the commission, one priest admitted to sexually abusing over 100 children, while another accepted that he had abused on a fortnightly basis during the currency of his ministry, which lasted for over 25 years. The total number of documented complaints recorded against those two priests is only just over 70.”

Archbishop Diarmuid Martin of Dublin had warned that the report would shock Catholics.

“Efforts made to ‘protect the church’ and to ‘avoid scandal’ have had the ironic result of bringing this horrendous scandal on the church today,” he said in a statement released Nov. 26, the day the report was made public.

“The damage done to children abused by priests can never be undone,” he said. “I offer to each and every survivor my apology, my sorrow and my shame for what happened to them. I am aware, however, that no words of apology will ever be sufficient.”

Archbishop Martin asked Catholics to support and encourage the “many good priests of the archdiocese … at what is a difficult time,” and he acknowledged the sense of betrayal felt by many Catholics.

“I hope that all of us – bishops, priests and lay persons – working together can rebuild trust by ensuring that day after day the church in the Archdiocese of Dublin becomes a safer environment for children,” he said.

Justice campaigner and abuse survivor Andrew Madden said he was happy the report was published but angered by its contents and the response by church officials.

In an RTE radio interview, he said: “I can’t help notice how articulate the bishops are when it comes to apologizing for the abuse, which is not what the inquiry is about, and then using very flowery language” about their roles.

“They are very articulate when it comes to apologizing for what other people did, namely pedophile priests. What they did themselves, they are not owning that,” he said.

The report found that Auxiliary Bishops James Kavanagh, Dermot O’Mahony, Laurence Forristal, Donal Murray and Brendan Comiskey “were aware for many years of complaints and/or suspicions of clerical child sexual abuse in the archdiocese.” Bishop Comiskey resigned at the request of the Vatican in 2002 following publication of evidence that he covered up child abuse.

Bishop Murray is now serving as bishop of Limerick and is considered the hierarchy’s most senior moral theologian.

“Bishop Murray handled a number of complaints and suspicions badly,” the report said, calling at least one situation “inexcusable.” It noted that in 2002 Bishop Murray acknowledged that “he had not dealt well with the situation.”

Since the report’s publication, there have been several calls for Bishop Murray to resign. Enda Kenny leader of the political party Fine Gael, called for all bishops implicated in the diocesan report to resign immediately, but Bishop Murray is the only one of the five auxiliaries still serving.

Denying that he had done anything wrong, on Nov. 27 Bishop Murray told the weekly Limerick Leader that he would not resign, but later that afternoon he said in a local-radio interview, “The question whether I remain on, as far as I am concerned, is a question for the people and priests of Limerick.”

Victims also have called for the investigation to be extended to other dioceses.

Cardinal Sean Brady of Armagh, Northern Ireland, president of the Irish bishops’ conference, said: “I am shocked and ashamed by the abuse of children described in the report. I want to apologize to all those who have been hurt and their families. I also want to apologize to all the people of Ireland that this abuse was covered up and that the reputation of the church was put before the safety and well-being of children. I am deeply sorry and I am ashamed.”

He also encouraged Catholics to cooperate with police in investigation of any crime.

His comments echoed those made by Dermot Ahern, minister of justice, equality and law reform, who said: “The era where evil people could do so under the cover of the cloth, facilitated and shielded from the consequences by their authorities, while the lives of children were ruined with such cruelty, is over for good. The bottom line is this: A collar will protect no criminal.”

The report found no direct evidence of a pedophile ring among priests in the Dublin Archdiocese, although it said there were worrying connections between some priests, notably Father William Carney and Father Francis McCarthy, who were seminarians together in the 1970s and who, in one case, both abused the same child.

In September 2006 the commission wrote to the Vatican’s Congregation for the Doctrine of the Faith asking for information on reports of clerical child sexual abuse conveyed by the Archdiocese of Dublin. The doctrinal congregation did not reply, but did contact Ireland’s Department of Foreign Affairs to say the commission had not gone through appropriate diplomatic channels.

The commission is an independent body and did not consider it appropriate to use diplomatic channels.

In February 2007, the commission wrote to the papal nuncio in Dublin asking if documents were available that were relevant to the commission’s investigations, but it received no answer from the nunciature. Likewise, the nuncio did not respond when extracts of the commission’s draft report were sent to him in advance of publication.