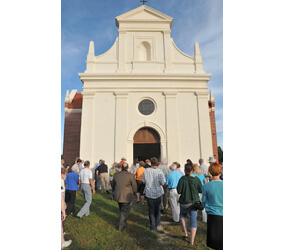 ST. MARY’S CITY – Maryland’s status as the birthplace of religious freedom in the United States became tangible Sept. 20, as an estimated 1,000 people witnessed the unlocking of a reconstructed brick chapel in St. Mary’s City.

The original Catholic chapel, St. John’s, was built in 1667 near Maryland’s first capital in St. Mary’s City and was a symbol of the religious freedom that had been a cornerstone of Maryland since English colonists first arrived in 1634.

In England at that time, Catholics were a despised minority. But in the new Maryland colony, Catholics – while still a minority – could worship freely. Lord Baltimore based Maryland’s government on the principles of freedom of conscience and separation of church and state.

In 1704, following an order from the royal governor, Sheriff John Coode locked the doors of the chapel and it was later dismantled, brick by brick. Catholics at the time could no longer worship in public.

In the dramatic Sept. 20 ceremony, current St. Mary’s County Sheriff Tim Cameron unlocked the massive oak and pine doors of the reconstructed chapel, using a key believed to be a replica of the one his predecessor used 305 years earlier to lock the chapel’s doors.

Before the ceremony, Cameron said unlocking the doors was a symbolic way to reaffirm “the idea of freedom of conscience.”

Washington Archbishop Donald W. Wuerl and Jesuit Father Edward Dougherty, who represented the Maryland Province of the Society of Jesus, were part of the procession to the chapel from a nearby barn, led by a group of men and women dressed in colonial garb.

One of the reenactors beat a large drum as the sheriff turned the key, and another shot his musket in celebration, as Archbishop Wuerl and Father Dougherty pushed the chapel’s doors open.

The archbishop said opening the doors was “a reminder of how we have to keep the doors of our hearts open, first to God, and then to one another. That’s what freedom of conscience and freedom of religion is all about.”

Monsignor Karl Chimiak, pastor of St. George Parish in Valley Lee, said he was proud to follow in the footsteps of the Jesuit priests who served southern Maryland for generations. “Brick by brick, stone by stone, you see how the Lord rebuilds his church,” he said.

Scholars used historical detective work in designing the reconstructed chapel, basing its look on Jesuit chapels from that time period. In 2004, historians, architects, builders and archaeologists came up with a plan for the chapel. From the foundation, they knew the chapel was about 54 feet long, and clues led them to believe it was about 25 feet tall.

Members of the community raised $3.2 million for the project. “It was a matter of faith, not only faith in God, but faith that we could do it,” said Jeanne Chandler, past president of the Historic St. Mary’s City Foundation, who praised the work of the volunteers and the community’s generosity in supporting the chapel project.

In the 1980s, a group of citizens led by local Catholics Fred and Beth McCoy raised funds for an archaeological survey of the chapel field, which had been used as farmland for generations after the original chapel was dismantled.

“My father used to say the faith of our fathers … was a sacred trust,” said Muffin McCoy Padukiewicz, community relations coordinator for Historic St. Mary’s City. “This is a realization of their dream.”

Blacksmith Peter Himmelheber fashioned the wrought iron cross atop the chapel from part of a tobacco press, and made the metal door latch from the iron tire of an Amish buggy.

The chapel will be open to the public during museum hours, and planners hope to open an interpretive pavilion there next summer.

Father Dougherty, pastor of St. Ignatius in Chapel Point, the last remaining Jesuit parish in southern Maryland, said the first time he saw the reconstructed chapel being built in St. Mary’s City “it brought tears to my eyes.”

“You know, we are on holy ground,” he said, noting that hundreds of the state’s early Catholics are buried in the ground surrounding the chapel. “We are grateful to them, and we will remember and thank God for all our ancestors,” he said.