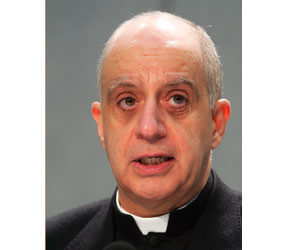 VATICAN CITY – Several members of the Pontifical Academy for Life have suggested that the academy’s president, Archbishop Rino Fisichella, be replaced because he “does not understand what absolute respect for innocent human lives entails.”

The call came in a statement distributed to some news outlets Feb. 18, five days after the academy ended an annual meeting at the Vatican. It was signed by five of the academy’s 159 members.

The Vatican spokesman, Jesuit Father Federico Lombardi, told journalists Feb. 19 that the group had not yet made a copy of their letter available to Pope Benedict XVI or the Vatican secretary of state, Cardinal Tarcisio Bertone.

“It’s a bit strange that persons who are members of an academy address a request of this kind without addressing it to the competent authorities,” Father Lombardi said. “It’s astounding and seems incorrect that such a document be given public circulation.”

Father Lombardi also said “the natural place to discuss” the group’s criticisms would have been during the general assembly itself and not in the public arena.

The criticism of Archbishop Fisichella stemmed from an article he wrote last year, which said a Brazilian archbishop’s response to an abortion performed on a 9-year-old girl had shown a lack of pastoral care and compassion.

The Vatican, reportedly after complaints from some Academy for Life members, later issued a clarification reiterating its teaching against abortion and saying the Brazilian archbishop had, in fact, acted with “pastoral delicacy” in the matter.

When the academy met at the Vatican Feb. 11-13, many observers expected the disagreement to take center stage. But the issue was not directly raised, according to participants, and Archbishop Fisichella told Catholic News Service that the atmosphere at the meeting was “serene and calm.”

In their statement, the five members said they had made “a political decision” to not publicly question Archbishop Fisichella’s leadership during the assembly’s proceedings because “an open challenge to (Archbishop) Fisichella in the assembly would have divided the academy.”

Another reason the group decided not to openly dissent during the meeting, it said, was because they believed there was “a reasonable hope that the Holy Father will recognize the need to provide (the archbishop) with an occupation better suited to his abilities.”

However, several days after the assembly concluded, the group decided to publish its critical statement, in part because of an opening address Archbishop Fisichella delivered to the academy Feb. 11. The statement said the archbishop not only did not retract what he said in his 2009 article, but claimed that the Vatican’s subsequent clarification – issued by the Congregation for the Doctrine of the Faith – had vindicated him.

According to the statement, Archbishop Fisichella described criticism against him as “personal attacks … motivated by ‘spite.’ ”

The proceedings of the pontifical academy were not public. Asked to verify the account given by the five signatories, an official at the academy told CNS Feb. 19 that an academy member “has no right to publicize” proceedings from a private meeting.

The statement said the lack of a public and open challenge to Archbishop Fisichella “has created the unfortunate impression that academicians are behind his presidency, resignedly or otherwise.”

“Far from creating unity and genuine harmony in the academy, Archbishop Fisichella’s address on the 11th of February had the effect of confirming in the minds of many academicians the impression that we are being led by an ecclesiastic who does not understand what absolute respect for innocent human lives entails,” it said.

“This is an absurd state of affairs in a Pontifical Academy for Life, but one which can be rectified only by those who are responsible for his appointment as president,” it said.

Pope Benedict appointed Archbishop Fisichella as president of the academy in 2008.

The signatories of the statement included: Luke Gormally, a senior research fellow of the London-based Linacre Center for Healthcare Ethics; Christine De Marcellus Vollmer, chairwoman of the Washington-based Alliance for the Family; Monsignor Michel Schooyans, a retired professor of theology and philosophy at the Catholic University of Louvain, Belgium; Dr. Maria Smereczynska of Poland; and Dr. Thomas Ward, president of the U.K.-based National Association of Catholic Families.

Vollmer sent Catholic News Service a copy of the statement Feb. 18. In an e-mail, she said that despite hopes that the controversy over the Brazilian abortion had been properly clarified, Archbishop Fisichella had “reignited the crisis” with his speech to the academy.

The abortion case prompted an unusual series of statements from different Vatican departments, as well as worldwide commentary. After doctors in Recife, Brazil, aborted the twins of the girl, who had been repeatedly raped by her stepfather, Archbishop Jose Cardoso Sobrinho of Olinda and Recife announced the excommunication of the girl’s mother and the doctors involved, saying the abortion was “a crime in the eyes of the church.”

Archbishop Fisichella, in an article published March 15 in the Vatican newspaper, L’Osservatore Romano, reiterated the church’s teaching on the serious evil associated with direct abortion and the penalties involved. But he also wrote that the local archbishop had put too much emphasis on the punishment of automatic excommunication incurred by the girl’s parents and the doctors who carried out the abortion and didn’t show enough pastoral care or compassion for the people involved.

The girl “should have been defended, hugged and held tenderly to help her feel that we were all on her side,” Archbishop Fisichella said.

Four months later, the doctrinal congregation published in the Vatican newspaper a clarification saying that any confusion over the church’s stance on direct abortion had been caused by “the manipulation and exploitation of Archbishop Rino Fisichella’s article.”

Before the academy met at the Vatican, one of the five signatories of the Feb. 16 statement, Monsignor Schooyans, had widely circulated among journalists an article he wrote criticizing Archbishop Fisichella.

While he didn’t name the archbishop directly, the monsignor quoted from the archbishop’s March 15 article and said it was one example of many in which some members of the church were engaged in a dangerous form of “bogus compassion.” Monsignor Schooyans was not present at the academy’s assembly.

When asked about the priest’s critique, Archbishop Fisichella told CNS Feb. 12, “If a member of the academy, if some people, for reasons of political exploitation, wanted to misconstrue my words, it is not my responsibility. Rather it’s the responsibility of those who wanted to create a situation of conflict.”