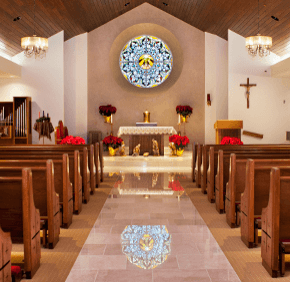 St. Agnes Hospital completed a $240
By George P. Matysek Jr.
gmatysek@CatholicReview.org
Twitter: @ReviewMatysek
Anne Buening seemed amazed as she glanced at an image of a stained glass window that could be seen perfectly reflected on a gleaming white floor inside St. Agnes Hospital’s chapel in Southwest Baltimore Dec. 18.
“Just look at it,” she marveled. “It’s beautiful.”
Just a few months ago, there would have been no reflection at all since the chapel floor was covered in dark carpeting. Much of the chapel, in fact, seemed overwhelmed by dark wood .
The worship space looks much different now that the hospital has completed a $240,000 renovation that has brightened the structure and transformed it into a livelier place to pray.
The chapel will be renamed in honor of Cardinal William H. Keeler, honorary chairman of the hospital’s Beacon of Hope capital campaign that helped raise $21 million toward the hospital’s $25 goal. Hospital leaders say the chapel’s new name recognizes the retired cardinal’s commitment to healthcare, interfaith collaboration and St. Agnes. Bishop Denis J. Madden will rededicate the worship space during a Jan. 28 ceremony beginning at 10 a.m.
As part of the renovation, the chapel was repainted. Flooring and lighting were updated, and kneelers and pews were reupholstered.
A tabernacle that previously belonged to the now-closed St. Peter the Apostle Church in Baltimore was relocated to St. Agnes. Marble bases were also fashioned to elevate wooden statues of the Blessed Virgin Mary and St. Joseph.
Buening, St. Agnes’ vice president of mission integration, remembered that when the statues were lifted, approximately 100 slips of papers with prayer requests were found beneath them. The hospital plans to place a special chest near the statues where people can drop their special intentions.
As part of the renovation, an image of Our Lady of Guadalupe that had previously hung near a Starbucks in another part of the hospital was relocated to a more prominent place near the chapel’s entrance. Each day, freshly cut roses are placed at the foot of the artwork.
“When a baby dies at the hospital, the nurses take a rose and they make a beautiful photograph of the baby with the rose,” Buening explained. “They make a memory box and put that picture with the baby’s booties and hat.”
Reaction to the restored chapel, which reopened Dec. 5, has been positive. Patients, family members and staff of all beliefs use the chapel daily to pray and reflect, Buening said.
“This is a Catholic hospital and our Catholic identity is so important here for everybody,” Buening said. “Everyone knows this is a safe place, a good place, and that whatever spiritual decision you make in your own practices is honored here.”
Also see:
14 local events for Catholics in 2014
Inside sports: St. Frances Academy grows its basketball legacy
PrevNext