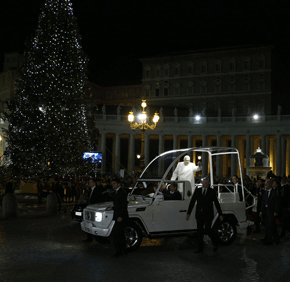 By Carol Glatz
Catholic News Service
VATICAN CITY – The new year will be brighter only if everyone steps outside their safe havens, gets involved and works together to solve local problems with generosity and love, Pope Francis said.
As 2013 comes to a close, let everyone ask God for forgiveness and thank him for his patience and love, the pope said as he presided over a Dec. 31 evening prayer service in St. Peter’s Basilica
May Mary “teach us to welcome God made man so that every year, every month, every day be overflowing with his eternal love,” he said on the eve of the feast honoring her as Mother of God.
Leading the annual “Te Deum” prayer service to thank God for his blessings in 2013 and the gift of salvation in Christ, the pope asked people to reflect on how they have spent the past year — the precious days, weeks and months the Lord has given as a gift to everyone.
“Have we used it mostly for ourselves, for our own interests or did we know to spend it for others, too? How much time did we set aside for being with God, in prayer, in silence, in adoration?”
People should also reflect on how they used their time to contribute to their communities.
The quality of life in a community — how it runs and looks — depends on everyone, he said in his homily, which he delivered standing from a lectern.
“A city’s face is like a mosaic in which the tiles are all those who live there,” he said.
While public officials and other leaders certainly have more responsibility, “everyone is co-responsible, for the good and bad.”
“Have we contributed, in our small way, to making (our communities) livable, orderly, and welcoming?” the pope asked. “What will we do, how will we act in the new year to make our city a little bit better?”
As the bishop of Rome, the pope looked at the Italian capital in particular, noting its “extraordinary” spiritual and cultural riches.
“And yet, Rome also has many people marked by material and moral poverty, people who are poor, unhappy and suffering, who prick the consciences of every citizen,” he said.
“In Rome, perhaps we feel this contrast more strongly” with such a stark difference between its “majestic setting, loaded with artistic beauty” and the difficulties people struggle against.
A city of opposites, Rome is teeming with tourists, “but is also filled with refugees. Rome is full of people who work, but also people who can’t find work,” who are underpaid or have jobs that harm their dignity, he said.
“Everyone has the right to be treated with the same attitude of welcome and fairness because everyone possesses human dignity” and are part of the same human family, he said.
Pope Francis said Rome, like all communities, will be more beautiful, hospitable, welcoming and kind “if all of us are attentive and generous toward whoever is in difficulty; if we know how to collaborate with a constructive and caring spirit for the good of all people.”
Every community will be a better place “if there are no people who watch it ‘from afar,’ like a picture postcard, who observe its life only ‘from the balcony’ without getting involved” directly with the many problems of the men and women who, “whether we want it or not, are our brothers and sisters.”
The pope underlined the important work and duty of the church in contributing to people’s lives and future, and how, with the leaven of the Gospel, the church is a sign and instrument of God’s mercy.
After the prayer service, Pope Francis was scheduled to travel by car to St. Peter’s Square to get a close look at the Nativity scene.
See also:
Vatican news highlights of 2013: The year of two popes
How do I get tickets to a papal Mass, general audience?
Copyright (c) 2013 Catholic News Service/U.S. Conference of Catholic Bishops
PrevNext