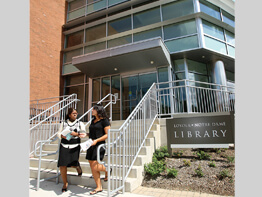 John McGinty sat down at a table in the basement of the Loyola/Notre Dame Library Sept. 12 with a soda can in hand and breathed a sigh of relief. He looked around and marveled at his surroundings.

The director of the building operated jointly by Loyola College in Maryland and the College of Notre Dame of Maryland had just finished giving a lecture about the future of libraries at an open house celebrating the newly renovated structure.

It was a fitting theme since Loyola and the College of Notre Dame’s $19.6 million project is aimed to keep a library relevant in an information age, when books and articles are a click away on computers.

Mr. McGinty spoke about the challenges libraries are facing, such as “Google, Wikipedia and Amazon.”

The secret to facing these challenges, he said, is good, old-fashioned human interaction.

“This space, particularly on the social side, begins to appeal,” he said.

The library sits between both campuses and joins them in a rare library partnership between schools. The end result is dazzling in its expansive feeling. The original building, which opened in 1973, once reflected the dark, industrial look of the era.

When Mr. McGinty arrived at the library in 2000, there were more than 600 individual tables, creating an isolated feeling among students. Now, 800 large tables can hold up to eight people in an effort to foster community interaction and learning. Everywhere a student turns, wireless access is available. A glass entryway and lobby has removed any claustrophobic elements, while new lights and carpeting have created a more eye-popping experience.

“The additions and renovation have created an amazing change,” she said. “It’s much more in tune with a student’s studying. It’s also a great place to relax because there are so many open, social spaces.”

The library added several classrooms, a large auditorium for gatherings and screenings, group study areas and a high-tech digital media center that includes publishing tools and audio/video equipment. The library will eventually be the home for the extensive archives of both schools.

Foot traffic has already increased at the library, officials said, as students yearn for a next generation of libraries.

“I think what the renovation does, is that it makes the library feel like it’s at the heart of the campus,” Dr. Seurkamp said.