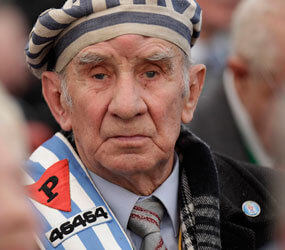 VATICAN CITY – Marking International Holocaust Remembrance Day, Pope Benedict XVI prayed that honoring the memory of the 6 million Jews who died in the Nazi death camps would lead everyone to greater respect for each human being.

“Deeply moved, we remember the innumerable victims of the blind racial and religious hatred, who suffered deportation, prison and death in those repugnant and inhuman places,” he said Jan. 27 at the end of his weekly general audience.

Reading his prepared remarks in both German and Italian, the pope told the estimated 5,000 people at the general audience that Jan. 27 marked the 65th anniversary of the liberation of the Auschwitz death camp at Oswiecim, Poland, and the rescue of “the few survivors.”

“That event and the testimony of the survivors revealed to the world the heinous crimes of an unheard-of cruelty that were committed in the extermination camps created by Nazi Germany,” he said.

Holocaust Remembrance Day, he said, is a time to “remember all the victims of those crimes, especially the planned annihilation of the Jews, and to honor those who, risking their own lives, protected the persecuted, opposing the homicidal madness.”

Pope Benedict prayed that by remembering the Nazis’ victims, all people would come to a greater respect for each human being and for the fact that there is only one human family.

“May almighty God enlighten hearts and minds so that such tragedies are never repeated,” he said.