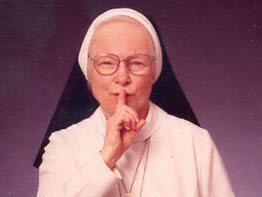 From the walls of Bon Secours Hospital, Sister Mary Magdalen Condry’s picture admonishes visitors to be quiet and not disturb the sick.

But it’s just another example of her sense of humor, and in fact she’s spent her life comforting patients, not censuring their visitors.

She’s tiny, but still dressed in the white dress and black wimple of the Sisters of Bon Secours, her presence looms large.

On Oct. 2, hospital staff, from the CEO to techs in scrubs, packed a reception to say goodbye as the 77-year-old sister retired from her volunteer position of preparing patients in same day surgery. For approximately 28,735 hours – or the equivalent of three years of full-time work – Sister Mary Magdalen secured the valuables of patients awaiting surgery, explained to them what to expect and then comforted waiting family members. She also took Communion to Catholic patients in the hospital and prayed with them.

At her retirement party, she was presented with a gift certificate to her favorite religious book store. “Oh my land,” she said. “That is a nice gift – it’s something I can use.” And then she couldn’t resist a joke: “Not something I can’t use, like clothes.”

“She often placed a warmed blanket around patients when they were cold,” Sister Mary said.

The staff presented Sister Mary Magdalen with a lovely warm fleece blanket, “to know that you are wrapped in our love.”

A few hospital staffers stood up to offer tribute. One employee recalled that when she was out sick, Sister Mary Magdalen called her every day, “and when I lost my hair and everyone said, ‘Take that wig off, take that wig off,’ she was the only one who said, ‘Leave that wig on.’ ”

Sister Mary Magdalen has been a sister for 58 years. A student nurse, she was drawn to the order because of its commitment to nursing. “I love it, to this day I love it,” she says.
She worked as a registered nurse in medical-surgical units in Massachusetts, Pennsylvania and Arras, France. She enjoyed her years in France because she spoke the language and because she worked the night shift.

“I was on night duty, and I liked it. I loved the quiet and doing one thing at a time instead of 25,” she said.

She felt the call from God as a young girl of 17, and never questioned it. “This is my life; I feel God called me,” she said. “The religious life is a very happy life.”

Now that she’s fully retired, she hopes to spend more time in prayer and in visiting the retired sisters at Marion Hall as well as “just taking it easy.”

“I love to read,” she added. “I like biographies because it really happened to them and it’s interesting what they went through.”

“She’s been an ambassador for Christ throughout the hospital,” Sister Mary said. “Throughout any encounter with people she lifted their spirits and helped them smile.”
Her image will grace the walls, but even stronger will be her memory in the hearts of patients she comforted.