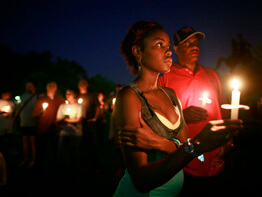 NEW ORLEANS – With an intense thunderstorm providing eerie sound effects, Archbishop Alfred C. Hughes of New Orleans told hundreds gathered at St. Louis Cathedral Aug. 29 in commemoration of the second anniversary of Hurricane Katrina to persevere in their faith despite the pitfalls of a painfully slow recovery.

Explaining that “hurricane” is a West Indies word for “divine wind” and Katrina means “cleansing,” Archbishop Hughes told the congregation, which included Louisiana Gov. Kathleen Blanco, that believers have a responsibility to remain hopeful that God will deliver them from the worst natural disaster in U.S. history.

“On the second anniversary of Katrina, can we pray that the divine wind of the Holy Spirit may cleanse us of what was not right in the old New Orleans, that we might know new life in a new New Orleans,” Archbishop Hughes said.

The thunder and lightning from the storm grew so intense toward the end of the Mass that Archbishop Hughes said he was glad that “on this Aug. 29 God sent us a thunderstorm rather than a hurricane.”

Blanco, who is Catholic, met the previous evening and on the morning of Aug. 29 with President George W. Bush, who had flown to the Gulf Coast to mark the somber anniversary. After the Mass, Blanco said she gave Bush a letter asking him to help the region’s homeowners get back into their homes by increasing federal funding for the Louisiana Road Home program, strengthening levees and restoring the coastline.

“The president was very affable and he was in a good mood,” Blanco said. “I thought he was very open to working with us, but he reserved that final commitment. It’s hard for a president to make a blanket commitment. The devil is always in the details. But I did tell him jokingly, ‘Mr. President, a billion dollars isn’t what it used to be.’“

Bush also visited a public charter school and met with the new superintendent of Catholic schools for the archdiocese, Ursuline Sister Kathleen Finnerty.

The Mass at St. Louis Cathedral was one of many liturgies and prayer services held throughout the Archdiocese of New Orleans Aug. 29.

At Our Lady of Prompt Succor Church in Chalmette, which is serving as the anchor church in St. Bernard Parish, Father Raymond Guillot, the pastor of Assumption Mission in Braithwaite, asked residents not to give in to discouragement.

Hanging from the back wall of the sanctuary were four blue banners with the words: Rebirth, Rebuild, Renew, Rejoice. “We want to celebrate our achievements with God’s help,” Father Guillot said. “We also need to look at the future and see what we can accomplish with God’s help.”

Father Guillot reminded the congregation that previous inhabitants of New Orleans had overcome other natural disasters, citing the 1788 fire that destroyed 75 percent of the city, the yellow fever epidemics of the 1800s and Hurricane Betsy in 1965.

“One day, people who come behind us will say, ‘Look at what they accomplished, and because they did, that’s why we’re here today,’“ Father Guillot said. “That’s our task.”

At an evening interfaith prayer service at St. Paul’s Episcopal Church in Lakeview – which has been restored after being inundated with 10 to 12 feet of water – Episcopal Bishop Charles Jenkins, Archbishop Hughes and other faith leaders signed a statement, “A Vision for a Renewed New Orleans.”

“All human wisdom can be summed up in two words – the first is wait, and the second is hope,” Rabbi Cohn said. “We have sustained a little blow to our confidence, to our trust in human nature. … But New Orleans, we still embrace hope. There are better times ahead.”