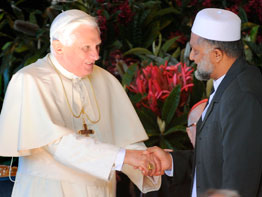 SYDNEY, Australia – Differences among Christians and between Christians and other religions cannot be ignored, but they also cannot be an excuse to stop dialogue, Pope Benedict XVI told religious leaders in Sydney.

At the ecumenical gathering, the pope said that recognizing each other as Christians because of a common baptism is just the beginning of the relationship that should exist among followers of Christ.

“The road of ecumenism ultimately points toward a common celebration of the Eucharist, which Christ entrusted to his Apostles as the sacrament of the church’s unity,” he said.

But Pope Benedict also told the church’s Christian dialogue partners, “I think you would agree that the ecumenical movement has reached a critical juncture.”

The pope said Christians must pray for God’s help and the Holy Spirit’s guidance as they try to follow the Scriptures and seek the truth.

“We must guard against any temptation to view doctrine as divisive and, hence, an impediment to the seemingly more pressing and immediate task of improving the world in which we live,” the pope said.

The pope met the Christian leaders, including Anglican representatives, while the Anglican Communion’s Lambeth Conference was taking place in England. The conference agenda included discussing ways to strengthen Anglican unity and overcome the threat of splits because of differences regarding the ordination of women and homosexuality.

Pope Benedict has said he hopes the Anglican bishops will find a way to maintain the communion in fidelity to the Gospel and Christian tradition.

Anglican Bishop Robert Forsyth, the assistant bishop of Sydney, said he was encouraged by Pope Benedict’s teaching about seeking the truth with love and not seeing one another as adversaries.

In many areas, he said, other Christians recognize and appreciate the leadership of the Catholic Church as “a rock in the rapids,” defending the importance of salvation in Christ, the supremacy of the Scriptures and “the objectivity of Christian morality.”

Bishop Forsyth said he suspects Christians will be united fully only at the end of time.

“As you know, on that day, of the three things that will survive, the greatest is love. And so it is with love, sir, that we welcome you today,” he told the pope.

Pope Benedict went directly from the ecumenical meeting to his meeting with representatives from Australia’s Jewish, Muslim, Hindu, Buddhist and Zoroastrian communities.

He praised the level of interreligious dialogue and cooperation found in Australia and said, “a harmonious relationship between religion and public life is all the more important at a time when some people have come to consider religion as a cause of division rather than a force for unity.”

The search for God, a recognition that personal fulfillment comes with sharing and the importance of sacrifice and self-discipline are teachings common to all faiths, the pope said.

“The universality of human experience, which transcends all geographical boundaries and cultural limitations, makes it possible for followers of religions to engage in dialogue so as to grapple with the mystery of life’s joys and sufferings,” he said.

Rabbi Jeremy Lawrence, the senior rabbi at Sydney’s Great Synagogue, told the pope that “though we may differ profoundly in the details or interpretations, our shared points of origin should bind us together” in friendship and mutual respect.

The Catholic World Youth Day celebration, he said, is a sign of “the continuing significance of faith in our world and among its youth.”

He prayed that the young would learn “not only that faith is alive and is relevant,” but also that “it wears many robes.”

The meeting with the pope included not only religious leaders, but also young people from each community. Most of the young representatives had taken part July 17 in a World Youth Day interreligious forum.

Vivek Thakkar, a young Hindu representative, told reporters the youth forum highlighted how young people are tired of “all this talk” about harmony and want practical ideas for working together, particularly in service and social justice projects.

“It’s a huge privilege” to have been invited to meet the pope, he said. “It was unexpected and I am humbled. Gurus and spiritual leaders are highly respected by Hindus.”

Sheikh Mohamadu Saleem, a member of the Australian National Imams’ Council, told the pope: “Muslims should become more inclusive and universal in their understanding of their religion. At the same time, significant segments of the Christian and other religious communities should overcome their misconceptions and prejudices of Islam and Muslims.

“If Muslims, Christians and other faith communities reach out to one another and build bridges rather than erect barriers, the whole of humanity will rejoice forever,” he said.

After the meeting, Saleem told reporters that one of the greatest difficulties facing Islam in Australia is “attracting youth and convincing them that religion is not an obstacle to peace.”