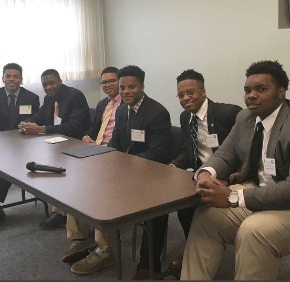 By Catholic Review Staff
The men and women of religious orders operating in the Archdiocese of Baltimore have joined the sustained interfaith effort to promote peace and justice in Baltimore City.
At the April 21 Baltimore Forum, a biannual meeting of major superiors of local religious communities, the religious exchanged ideas with archdiocesan leadership, including Archbishop William E. Lori and Bishop Denis J. Madden.
Also present at the meeting, which happened to fall near the one-year anniversary of the death of Freddie Gray Jr., were leaders from other faiths, including Imam Earl El-Amin of the Muslim Community Cultural Center of Baltimore and Rabbi Steven Fink of Temple Oheb Shalom, as well as six students – all city residents – from Mount St. Joseph High School in Baltimore.
According to a press release provided by the Forum Executive Committee, the Forum has established the goal of identifying a concrete project on which the religious and archdiocese may collaborate, in keeping with the overall interfaith effort and in accord with the Holy Year of Mercy declared by Pope Francis.
Imam El-Amin told the assembled that his Muslim faith demanded that he “work to establish harmony, peace, justice and prosperity.”
“I have to do this,” he said at the Forum, which was held at Villa Assumpta, the Baltimore motherhouse of the School Sisters of Notre Dame.
Imam El-Amin emphasized that moral and ethical decisions – not political ones – would address the issues of the city.
The gathering also heard from representatives of service organizations with ties to religious, including Bon Secours Hospital, Catholic Charities’ Esperanza Center and Beyond the Boundaries. The representatives offered updates on work being done to address systemic poverty, assist immigrants and bring people together to address fears and misconceptions about the city.
Finally, the six young men from Mount St. Joseph, an institution sponsored by the Xaverian Brothers, discussed their challenges as well as the support they have received from their school, their parishes and other churches.
Senior Justin Sharpe talked about how violence had affected his family and how easily he could have become filled with anger if not for the role models and mentors in his life.
Junior Cameron Williams discussed his volunteer work at an Edmondson Village middle school, an answer to that need for role models.
Freshman Eric Wilson testified to the power of a mentor by reflecting on a teacher who had encouraged him to apply to either Mother Seton Academy or St. Ignatius Loyola Academy, both of which serve students from families with modest income. It was St. Ignatius that set Wilson on the path to Mount St. Joseph.
Archbishop Lori particularly enjoyed hearing from the students, according to the press release, and praised the April Forum as one of the most spirited and productive he had attended.