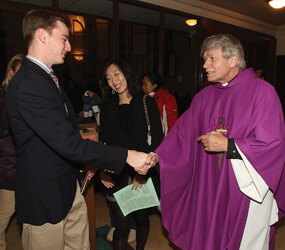 Those who enter the religious life do so with great sacrifice. Some give up potential families to serve God on earth.

How they arrived at their calling was often a result of other religious and clergy providing steadying hands during formational years.

On the day he was setting out on his journey to become a Christian Brother, Cumberland native Kevin Strong saw some local girls hanging out in front of a house.

The minute he told them of his plans, the neighborhood friends responded uniformly, “You’ll be back in a week!”

On June 10, he will celebrate 60 years as a Christian Brother.

Like many who enter the religious life, Brother Kevin, now a freshman guidance counselor at Calvert Hall College High School in Towson, found inspiration early in the Christian Brothers at the now-closed LaSalle Institute High School in Cumberland.

“They had a very strong presence,” the former Calvert Hall and Cardinal Gibbons School president remembered. “It was obvious they cared about us. They were always there, moderating sports, the drama club and other local groups. That’s kind of what I tried to do.”

Brother Kevin had a girlfriend at the time of his discernment. He liked dating and admits raising a family would have been “something I would have loved doing.”

He believes he found his purpose at Calvert Hall.

“It’s a wonderful life,” the 78-year-old said. “I have boundless energy, and it is good for us to be here making men in the image and likeness of God.”

Similarly, Sister Kathleen Jancuk finds much of her teaching style is similar to the School Sisters of Notre Dame who taught her at Our Lady of Fatima School on Pratt Street in Baltimore.

“They always had a sense of caring about the children,” Sister Kathleen said. “Whether it was getting our work done or making sure we had breakfast in the morning, they cared for us. I wanted to have the kind of joy they had and care about children the way they did.”

She said that even though her handwriting was not strong, one sister gave her high marks for motivation. Now a School Sister of Notre Dame, she says those “raising-the-bar” moments remain as she works with students with reading problems at Bishop Walsh School in Cumberland.

“Being a sister is very rewarding,” the sister of 38 years said. “The whole sense of being gifted by God goes back to my elementary school days. I was called to be a teacher.”

Deacon Richard D. Novak of the Catholic Community of St. Michael and St. Patrick in Fells Point didn’t think God was beckoning him in the 1970s. He was happy being the parish council president at St. Patrick, his childhood church, and working in the finance department at Johns Hopkins Hospital.

As he explored the vocation more, he prayed.

“I saw the spirituality coming out so clear,” he said.

Ordained in 1977, Deacon Novak has found a joyous life, witnessing marriages, performing baptisms, helping at funerals and attending to the sick and hopeless.

“I enjoy talking to these people and bringing them closer to God,” the 76-year-old said.

He said his role as a deacon also allows him to be on the streets with the people.

“If I had to do it all over again, I would do it faster,” he said of his calling. “That’s how much I enjoy it.”

Father Thomas Ryan, chaplain of the Newman Center at The Johns Hopkins University in Baltimore, had two very different influences early in his life.

He attended a high school run by Christian Brothers, Central Catholic, in Pittsburgh.

The brothers and Religious Sisters of Mercy served as a gentle influence for the self-described people-pleaser.

“I like the fact that they took an interest in us,” Father Ryan said. “They were human vocational voices.”

He became a Christian Brother, came to the Baltimore area and began four years of work at Calvert Hall with Brother Kevin.

He also developed friendships with archdiocesan priests like Monsignor Edward F. Staub, Monsignor James J. Cronin and Father Charles K. Riepe, all now deceased. He routinely queried about what they did during the week.

“They asked me if I ever considered the priesthood, perhaps based on the questions I asked,” Father Ryan said. “I had a curiosity about what their lives were like.”

Now, his life is “24-7” working with college students.

He said a few Catholics at Johns Hopkins, a public university, have inquired about religious vocations. He gives them simple advice.

“In many ways, I’m the voice that was like the voice that brought me here,” he said of those archdiocesan priests. “I say, ‘Have you ever looked at that?’ ”