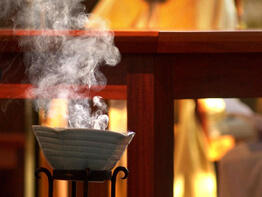 WASHINGTON – Present trends suggest a declining future for many communities of men and women religious, but religious are called to imagine a different future, Sister Doris Gottemoeller said Feb. 3.

The theme of this year’s symposium was “Re-Imagining Religious Life in the 21st Century.” Sister Doris addressed the overall theme, while Father Connors described a specific effort by a community of Conventual Franciscans in Syracuse, N.Y., to create a new center of Conventual life and ministry.

Noting that a futurist tries to analyze current trends and prevailing forces and extrapolate them accurately into the future, Sister Doris said present trends in religious life include:

– “The aging and numerical diminishment of traditional religious congregations,” with a median age of about 70 in many congregations.

– Withdrawal from or only token presence in many institutions once run by one’s congregation.

– A “tendency of many congregations to embrace an individualism in spirituality, interpretation of the vows and communal practices, which dilutes any distinctive identity.”

– “Initiatives of surprising creativity … (and) great generosity and willingness to redeploy limited resources on behalf of mission.”

Extrapolating from those and other current trends in the church, she said, “we can picture a church within 15 to 20 years which looks very different from what we know today. Religious life will be a vestigial presence at best. Our intellectual, spiritual and ministerial patrimony will be largely depleted.
“Most Catholics will have never met a religious and will have no appreciation of this way of life as a possible option for themselves. The religious who remain will be isolated in retirement centers or absorbed into parishes without a distinctive identity,” she said.

Describing religious life as a gift to the church and a witness to a distinctive way of life that “contributes to the holiness of the church,” Sister Doris asked her audience, “Can we imagine a future in which this way of life flourishes again?”

“It is eminently possible,” she said, noting that in the course of church history religious life has waxed and waned.

“Individual members can live lives of admirable holiness or apostolic zeal, but they can’t change the membership unless it wants to change,” she said. A key to change that will lead to growth, she said, is answering with clarity “the fundamental questions: How will we live and what will we do?”

On how to live, she said that “community living is the template for the other dimensions of our life” because “my living situation qualifies my experience of poverty, of celibacy, of obedience.”

“Within a congregation a corporate spirituality is nourished by shared prayer, reflection, ritual and celebration … (as) part of the warp and woof of daily living,” she said.

She said it is never easy to determine how to adapt one’s founding charisms to changing needs, but “whatever direction is chosen by an institute, I would suggest that it must be prophetic and corporate. … It requires a facility in drawing the gaze of the inquirer from ourselves to the Gospel that we proclaim and which animates us.”

“What is needed is deep discernment on the part of each congregation, leading to a clear vision, clearly expressed and vividly demonstrated. In the absence of that, our future is indeed perilous,” she said.

Father Connors said that when he was elected provincial minister in the 1990s his province had just been through four years of “low-grade depression” brought on by “ungrieved losses consequent to the Covenant House scandal.”

A province member, Father Bruce Ritter, internationally renowned for his work with runaway youths and the founder and head of Covenant House, was removed from that post in 1990 following allegations of sexual misconduct with some of the youths he served.

“At the initiating assembly of my term, the friars risked giving voice to the sullen silence of grief and anger. … The consequence was a surprising burst of creative energy within our ranks and the sequence of decisions to create new centers of Conventual life and ministry,” Father Connors said.
He described an experiment in Syracuse in which “eight friars started from scratch without the benefits and burdens of ministry assignments, mandated to develop relationships and practices that would ground and support community life and mission.”

He described the prayer life, community life, forms of outreach to people in need and alliances formed in the wider community as that community seeks to find new ways to follow in the footsteps of St. Francis.

After completing his term as provincial minister, Father Connors became a member of that community.