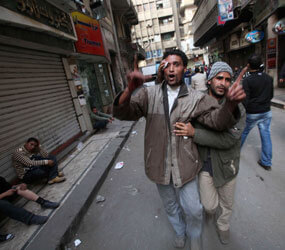 WASHINGTON – Religion has had its role to play in the mass rallies in Egypt protesting the oppressive regime of President Hosni Mubarak, according to the head of the Arab American Institute.

“To date, you had Muslims guarding the Christian churches. You had Christians surrounding the mosques on Friday (Jan. 28) to keep the police from storming them,” said James Zogby, author of “Arab Voices: What They Are Saying to Us, and Why it Matters.”

“As folks used to say in the labor movement: ‘On the line, allies get made.’ I think there is a public coming together of at least some elements,” he added. “We don’t know enough, because America doesn’t listen enough and isn’t engaged enough in following the public discourse (in Egypt). So we don’t know yet who the key players and what the key elements of this movement are going to be.”

Inspired by a seemingly out-of-nowhere democracy movement in Tunisia early in January, Egyptians took to the streets of Cairo, the capital, en masse beginning late in January to oust the Mubarak government, in power for 29 years.

“Clearly there was a spark from Tunisia that set some folks in motion, but the opposition in Egypt has been in place for decades, and has been growing in some ways because of the economic situation, because of the collapse of the (Middle East) peace process, and the sense of the futility of the path of the current government has taken,” said Zogby, brother of noted pollster John Zogby.

“When they saw these demonstrations in Tunisia they thought, ‘Why not?’ And they did (demonstrate). And I’m sure they were surprised at their success,” he added.

On Feb. 1, Mubarak said he would not run for re-election in September, but the tens of thousands of protesters who want political and economic reform were calling for him to step down immediately. On Feb. 2, bloody violence broke out between Mubarak’s opponents and his supporters, and some observers blamed government forces for the violent clash.

Zogby, in a Feb. 1 telephone interview with Catholic News Service from Florida, said the Obama administration “gets points from me for trying to thread the needle. They’ve been very cautious, very cautious. They know the (Egyptian) military has to be protected. … They don’t know what the Middle East will look like” if the military is undercut.

He also lauded the Republican congressional leadership for being “very responsible in urging a more cautious approach.

“We have as much role in Egypt right now as Hugh Hefner would be giving Marriage Encounter classes,” Zogby said.

It was unclear who might assume power if Mubarak resigns. Some fear it would be an Islamist fundamentalist regime, but Mubarak’s opponents include both radical and moderate Muslim groups.

In a survey conducted last spring by the Pew Research Center’s Global Attitudes Project, a 59 percent majority of Muslims in Egypt believed that democracy was preferable to any other kind of government.

About 22 percent, however, said that in some circumstances, a nondemocratic government could be preferable, and another 16 percent said it did not matter what kind of government is in place for a person in their situation.

Egypt is 90 percent Muslim, mostly Sunni. But the country also is home to a Coptic Christians, who make up about the remaining 10 percent of the population. Of that number, about 90 percent are Coptic Orthodox, with the rest mostly Coptic Catholic. It is the largest Christian population in any Middle Eastern nation. Coptic was the principal language spoken in Egypt before the Muslim conquest. Most Coptic Catholics, who are part of the Eastern Catholic Church, are concentrated in Upper Egypt, although in recent decades there have been migrations to other parts of the country.

Yasser el-Shimy, a lecturer at The Catholic University of America in Washington and a former Egyptian diplomat, told the BBC World Service Jan, 31: “The regime is waiting to see how many people actually turn up to the (Feb. 1) protests, and if millions appear as the organizers are hoping, something will have to give. I think the Mubarak regime relies for domestic support on two institutions: the military and the police force. The police have been unable to protect the regime, and the military has been unwilling. Right now, they have no domestic pillars of support and they are in a very tough predicament.”

In a Jan. 27 essay for Foreign Policy magazine, el-Shimy noted, “Income inequality has reached levels not before seen in Egypt’s modern history. According to the United Nations Development Program, at least 23 percent of the population lives under the poverty line – earning $2 a day – and many more are just above it. By 2020, Egypt’s population will reach 100 million, the majority of which will be young people under 30 years of age. This is a recipe for unrest.”

Zogby told CNS that Egypt’s peace deal with Israel in 1981 gets it much foreign aid from the United States. However, he added, polling has revealed that only 12 percent of Egyptians hold a favorable attitude toward the United States, 2 percent favor U.S. policy in Iraq, and 3 percent approve of U.S. policy toward Palestine.

“Because the Mubarak government has supported those positions, there’s a real doubt on their legitimacy,” Zogby said.

How events will play themselves out is not yet certain, he added. “What’s clear is that the Egyptian military remains the backbone of the society. It is a very strong and independent institution. But It cannot govern by itself. It has a civilian component. But the last three – the only three – presidents of Egypt have emerged from the military structure. The question of what will the military do is on everybody’s minds.”