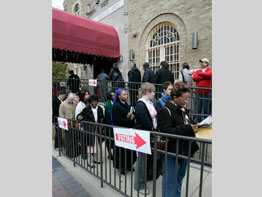 WASHINGTON – However the post-election analysis interprets the actual influence of the religion-based aspects of this year’s presidential campaign, the rules of that part of the political playbook may have changed for good.

Without even seeing exit-poll data, it was clear that several presumptions about the role of religion in presidential politics from the last few elections got turned on their head this time.

“Precedents are being set,” said Burns Strider, who served as religious outreach director for Sen. Hillary Clinton’s campaign for the Democratic nomination for president.

For instance, typical of faith-based outreach in the 2004 campaign was an e-mail letter sent to tens of thousands of parishioners by a group of ministers who led Protestant megachurches, Strider said at an Oct. 30 forum in Washington co-sponsored by Princeton University’s Woodrow Wilson School of Public and International Affairs and the PBS show “Religion and Ethics Newsweekly.”

The letter focused on what it called core principles for Christian voters, principally opposition to abortion and same-sex marriage.

At least part of the reason was that Democratic leaders made concerted efforts at outreach in the years between elections, including efforts to leaders of the Catholic Church.

At the same time, organizations such as Catholics in Alliance for the Common Good and the Matthew 25 Network set out to broaden the perception of what people of faith see as important in politics, adding to the discussion topics such as poverty, economic justice and AIDS.

Among the other differences in how religion played out in the campaigns was that for the first presidential race since Bill Clinton’s in 1992 and 1996, the Democrats had the candidate who was arguably more comfortable than his Republican counterpart in talking about his faith and articulating its influence on his life.

“I am my brother’s keeper,” Democratic Sen. Barack Obama said among his regular scriptural references in speaking appearances around the country. Meanwhile, Republican Sen. John McCain’s oft-repeated story about his encounter with a secretly Christian guard at a Vietnamese prison camp 30 years ago became his stump-speech reference to the place of faith in his life.

Whether because of Sen. Obama’s personal experience in working with faith groups, or because the party leadership finally caught on to approaches used successfully by the Republican Party in previous races, the Democrats for the first time since perhaps the 1960s had broad and effective religious outreach efforts.

In 2004 the Democrats had a one-person religious outreach “staff” who wasn’t allowed to talk to the media and was ignored at every turn, but the party “got religion” in 2008. Sen. Obama’s campaign had an entire religious outreach department, with money to spend and the ear of the candidate.

In another twist since the last election, admonitions from Catholic bishops about the election focused on individual voters’ moral responsibilities, rather than on elected leaders and their suitability to receive Communion.

At the forum, panelists said one reason for that change was that Catholic Democrats such as Rep. Rosa DeLauro of Connecticut and church leaders such as Cardinal Theodore E. McCarrick, the retired archbishop of Washington, have made a concerted effort at dialogue in the last four years.

Flare-ups of the conflicts between politicians and the church, such as when Democratic House Speaker Nancy Pelosi of California, a Catholic, misstated church teaching about abortion on “Meet the Press,” died down relatively quickly in the national news and didn’t produce the level of public admonitions seen in 2004 about who is fit to receive Communion.

As the presidential election campaign drew to a close, some U.S. bishops urged Catholics not to base their votes on one issue alone, while others said no combination of issues could trump a candidate’s stand on abortion.

The U.S. bishops also announced they were adding a discussion on “the practical and pastoral implications of political support for abortion” during their annual fall general meeting in Baltimore next week, although it was taking place after the presidential election.