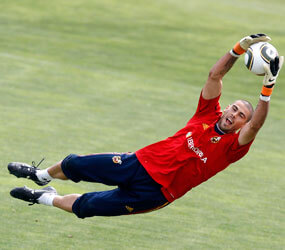 The church’s pastor, Father Esteban Diaz, says that bringing parishioners together for the games will promote good will and friendly relationships in his community. On a larger scale, he believes the quadrennial event is an opportunity to fight for peace.

“I want (the World Cup) to be a world meeting point with a harmonious atmosphere where we fight against differences. That is the most important,” Father Diaz said. “As a soccer fan and a Spaniard, I would like Spain to win.”

Spain, the 2008 European champion and a favorite to win, is among 32 national teams that will compete in the month-long tournament and one of 13 teams that come from countries with majority Catholic populations representing more than half of the world’s Catholics. Another three World Cup countries – the United States, Germany and Nigeria – have at least 10 million Catholic residents, according to a June 4 report by the Center for Applied Research in the Apostolate at Georgetown University in Washington.

Despite overwhelming Catholic support, religion has an unassuming place in the country’s most-cherished sport.

The Spanish team chaplain, Father Daniel Antolin, who has also served as Club Atletico de Madrid’s team chaplain for more than 30 years, says the “de-Christianized” Spanish team is noticeably less religious than players from past generations.

“We are losing our religious tradition,” he told Catholic News Service June 4.

The 70-year-old Catholic priest has been a soccer aficionado since childhood. As a chaplain, he has watched countless practices and matches from the sidelines and guided athletes through Catholic rites such as weddings and baptisms.

“The players respect me as a priest and as a friend,” Father Antolin said of his role.

While players do not attend Mass together or formally gather to pray, most rely on their Catholic upbringings to soothe pre-game nerves and pray privately, sometimes silently repeating the Lord’s Prayer before matches, Father Antolin said.

The Spanish team’s discreet invocations to God contrast sharply with Brazil’s open displays of spirituality. In 2002, when the South American team won the World Cup trophy for a record fifth time, players held hands, fell to their knees and bowed their heads in prayer. Others wore T-shirts that said “I love Jesus” and “I belong to Jesus.”

Around 273 million Catholics – about one in four of the world’s Catholics – live in Brazil, Spain and Argentina, another World Cup contender, CARA reported.

Father Antolin attributes at least some of the Brazilian team’s success to its religious unity and criticizes a decision by FIFA, the international soccer football governing body, to ban clothing and equipment with religious, political or personal statements on the field, a decision influenced by Brazil’s public Christian devotion.

Jim Stjerne Hansen, head of the Danish Football Federation, said there is no room for religion in soccer after the Brazilian team again prayed openly and revealed undergarments with Christian messages following their win against the United States at the 2009 FIFA Confederations Cup. The players were not punished because the display happened after the final whistle.

“Just as we reject political manifestations, we should also say no to religious ones. There are too many risks involved … with people of different religious faiths,” Hansen said in widely publicized remarks.

Sao Paulo resident Claudia Nunes says she, like most Brazilians, does not mind watching her team pray on the field.

“I think (FIFA) should allow people to express (their) religion as far as it does not offend anybody else … I don’t think that’s a big deal,” Nunes said.

“I really don’t think that God can help us to win the game, but at least this good energy, and good thoughts can help,” she added.

Father Antolin will rely on God for help when Spain faces Switzerland June 16.

“It will be challenging, but of course I believe we can finish in first place with the help of God,” he said.