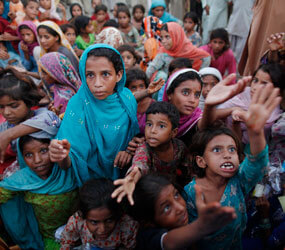 BANGALORE, India – Many Pakistani aid workers had one of the “most meaningful Ramadan fasts” in their lives this year, said a senior relief coordinator for Baltimore-based Catholic Relief Service in the South Asian country.

“Some of them were saying that the 24/7 kind of relief work we carried out during the Ramadan fast was as fulfilling as going on a pilgrimage to the Mecca,” said Nasrullah Khan, head of the CRS office in Besham, Pakistan.

A pilgrimage to Mecca in Saudi Arabia, the birthplace of the prophet Mohammed, is the dream of many Muslims, who are asked to try to make the trip at least once in a lifetime.

Though normally CRS, the U.S. bishops’ international relief and development agency, works five days a week, this year’s month of Ramadan was “a unique occasion,” said Khan, a Muslim who leads team of 35 CRS staff in the mountainous region around Besham, nearly 200 miles north of Islamabad.

“Due to the enormity of the floods, all of us decided to put in extra hours and skip our holidays. That has made the Ramadan fast meaningful,” Khan told Catholic News Service in a telephone interview Sept. 10, the beginning of Eid al-Fitr, the three-day holiday marking the end of the fast.

Normally, CRS staffers would report to work at 8 a.m. but, during the flood relief work, he said, they reported at 5 a.m. and continued late into the evening.

“None among us had such an experience before, but nobody was complaining,” said Khan. He said normally the staff works at a “leisurely pace” during the monthlong Ramadan fast, when Muslims avoid even drinking water from dawn to dusk.

“The suffering and hardship of the people was such that we forgot that we were working on empty stomachs and carrying relief supplies on shoulders to remote areas,” he said.

More than 20 million people were affected and 1,600 were killed in the worst floods in Pakistan’s history.

“When the donors were rushing money and material to help our people, we thought we had a duty to forgo our comfort and rest. That is the spirit of (the) Ramadan fast,” said Khan.

Though he used to travel home to visit his wife and six children on weekends, Khan said he rarely saw them this year, except en route to Islamabad for business.

“I had explained the situation to them and they had no complaints,” he added.

But, he said, the loss of not seeing his family was “more than compensated” when he joined co-workers and flood victims to break the fast in the evenings in remote areas.

“The joy on the faces of those hungry people while breaking the fast with us was incredible,” said Khan.