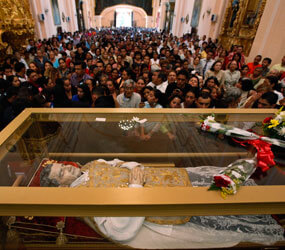 WASHINGTON – More than 16 months after it began a world tour touching over 100 nations, a casket containing relics of St. John Bosco is scheduled to visit the United States and Canada beginning in mid-September.

For the tour, the bones and tissues of the right hand and arm of the 19th-century Italian saint have been placed within a wax replica of St. John Bosco’s body, which is being displayed in a glass box mounted on a large wood and metal cart.

The display – weighing more than 1,800 pounds and measuring approximately 8 feet long, 3 feet wide and 4 feet tall – has been transported around the world by plane and in specially designed and built trucks.

According to the Salesian News Agency, the relics have been receiving an enthusiastic welcome and yielding spiritual fruits at every stop.

“The presence of the relics among us (Salesians) has made it very clear that Don Bosco is very much alive among us, through us and in us for the benefit of many,” wrote Father Horacio A. Lopez, former provincial of the La Plata province of Argentina, in a letter thanking Father Pascual Chavez Villanueva, the Salesian rector superior, for the tour.

The relics were in Haiti to mark the six months that had passed since the Jan. 12 earthquake that devastated the Caribbean nation. In a video message in the Creole language that accompanied the relics, Father Chavez expressed solidarity with the people of Haiti and prayed that “this tragedy may be transformed into a blessing for the country.”

“Let us rebuild the country; Haiti must be reborn,” he said. “Young people, don’t be discouraged but work to bring new life to the country.”

The itinerary for the pilgrimage thus far has included Italy and most of the Latin American countries. On July 29, the relics were traveling from Honduras to El Salvador; they were scheduled to arrive in California from Mexico Sept. 11.

Here is the schedule for the relics in the United States and Canada:

After the relics leave Canada, they are scheduled to travel through 17 countries of East Asia for about a year.

“South Korea, Philippines and Thailand will get the traditional life-size casket containing a statue of Don Bosco similar to the one preserved in the Basilica of Mary Help of Christians” in Turin, he said in a statement. “Japan will have an ostensory of the relics in a monstrance-type reliquary. Other Asian countries will have a near-life-size statue of Don Bosco with his relics.”

“In Asia, we expect the same enthusiasm, not only from Christians but also from thousands of past pupils and friends of Don Bosco coming from religious traditions other than Christianity,” he added.