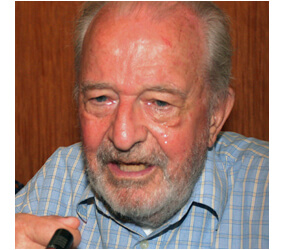 PASAY CITY, Philippines – Irish Columban Father Michael Sinnott said he hopes to resume his ministry after being released by kidnappers who had held him for a month.

The priest said he was kept in “very primitive” conditions in two areas, one a swampy area “with mud all around us.” He said he could not move about and was forced to sit in a hammock all day with his guard, reported the Asian church news agency UCA News.

He also was kept in the jungle and at one point was forced to march for approximately eight hours through the mountains.

Father Sinnott, 79, said he did not think anyone would want to kidnap him again, because he had slowed his captors.

“I’m an old man, and I had a hard time walking,” the priest said, laughing.

He said he would like to continue working in the Pagadian Diocese where he has served most of the 42 years he has spent in the Philippines.

Father Sinnott was released before dawn Nov. 12 in Zamboanga City, about 500 miles southeast of Manila. The chief peace negotiator for the Moro Islamic Liberation Front handed him over to government officials, but did not say where they found him or disclose any details about his abductors.

The priest was later flown to Pasay City, south of Manila, where he met reporters.

The priest rejected the idea of seeking retribution.

“I have no plan to file any charges,” he said.

Father Sinnott was abducted from the Columban Fathers’ residence in Pagadian City Oct. 11 by a group of men who put him in a van and then on a boat before handing him over to a second group.

The priest said the first group was a bit rough with him, but his captors treated him well and food was adequate considering the spartan conditions.

Father Sinnott said he has no idea who his kidnappers were but is “very sure” they were not members of the Moro Islamic Liberation Front.

The missionary described his captors in the mountains as “very well organized.” Supplies arrived regularly, and he was given food “specially for me” twice a day.

Earlier, while he was held in the forest, his captors said attempts to free him had been foiled by bad weather.

Father Sinnott explained that his kidnappers had scripted the message he read on a video made Oct. 24. The message was written in Bisaya or Cebuano, a dialect used in central and southern Philippines, and the priest said he had to translate it into English. He said his captors also lectured him about their ideology.

They told him they were freeing him so he could tell the international community that they are indigenous Filipinos of Mindanao, the southern Philippine region, and would fight until Mindanao was independent with the Quran as its constitution.

Father Sinnott, speaking in both English and Bisaya, thanked “every one of my friends that I know prayed for me while I was in captivity.”