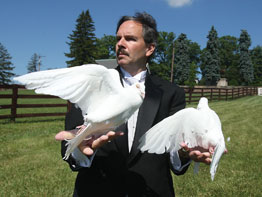 So as baffling as it may be to understand how 214 white doves find their way back to their coops in Perry Hall and Kingsville after being released into the open blue sky, it’s not surprising the birds return – every time.

In 18 years of operating a dove release business as the owner of Wedding Doves for Love, Daniel Vitilio, 46, said he has lost few birds. One batch of 12 even followed the course home from Frostburg after eliciting “oohs and aahs” from wedding guests and a bride and groom after their marriage ceremony.

“They recognize landmarks,” said the energetic Mr. Vitilio of the birds, which actually are not doves, but Janssen pigeons. The parishioner of St. Stephen, Bradshaw, runs the bird business with his wife, Michele Vitilio, on the 15-acre Eagle’s Nest Ranch a few miles from his parish.

“It takes major training,” he said, describing how the birds are driven away from home one “jump” at a time. They fly back, and then he drives them further, working in five-mile increments north and south. He repeats the process over 6-8 months until the birds know where to call home. They can never be retrained to a new home.

Dressed in a black tuxedo with a silver tie and paisley vest, the bird handler confidently and fearlessly stuffed 12 doves into a small cage as if bagging groceries, before demonstrating their elegant flight over his property. Because the doves are already home, they circle overhead again and again, happy to exercise their long wings while maintaining a tight formation. When one turns left, they all do.

The flock is released twice a day. “We want them strong” for the 200 weddings per year, he said, as he unlatches the long low cage in front of the coop, releasing about 70 more birds.

Listening to their rhythmic flapping, witnessing their temporary freedom, and watching their small bodies of stark whiteness against the blue sky, definitely satisfies the senses.

When released during weddings, funerals, christenings, graduations, and other celebrations, the graceful doves may circle once or twice, fly to an elevation of 150 feet, then back to the place where they know their next meal will be. Sometimes they beat home Mr. Vitilio, or one of his five drivers.

“It was gorgeous and a unique touch – and a good way to get people out of the church!” said Christie Bodine, 29, who hired the service for her January wedding, adding extra doves for the children in the wedding party to release.

“They thought that was precious,” said the new bride, who wed Michael Bodine, 31, at Holy Trinity, Glen Burnie. “It was beautiful. People were taken aback; it was a surprise for the guests.”

Although Wedding Doves for Love is how the Vitilios earn their living, Mr. Vitilio’s “hobby” is the slew of other free-roaming animals on the Kingsville farm: chickens, pheasants, tropical birds, owls, a Harris hawk, a redtail hawk, a rare albino peacock and its colorful mate, and a turkey named George. There are also pigs, horses, goats, sheep, Mr. Vitilio’s pride and joy – Puddy, a Siberian lynx he once bottle-fed like a kitten.

Five buffalo used to roam the green partially wooded property, but after a scary mishap with one, they roam no more. What remains of that animal-owning experience is a stuffed buffalo head in the Vitilio’s living room, a fly swatter made of its tail, and one front leg crafted into a lamp.

“The (American) Indians don’t let anything go to waste,” said the Dr. Doolittle-type, who follows suit. Additionally, the buffalo’s toes are now wind chimes and the other legs made into paddles. Two freezers once held its meat.

“I’ve been bringing home animals since I was little,” he said in a rapid-fire tone, obviously excited showing off his menagerie. “Anything I could find in the woods.”

“They keep breeding,” he said. “They give me good babies.”

Eagle’s Nest Ranch welcomes school, church, and groups of children with developmental disabilities and accepts no money to wander the free “zoo.”

“I’ve been blessed,” he said, “I don’t need it. Some of these kids have never seen an animal.”