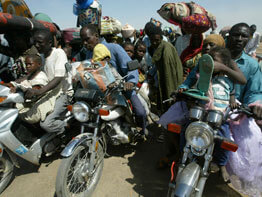 CAPE TOWN, South Africa – Thousands of people who fled Chad to neighboring Cameroon after rebel fighting in early February are in a desperate situation without any infrastructure to support them, said a spokesman for the U.S. bishops’ Catholic Relief Services.

“They’re in a predicament: Do they stay in Cameroon where they don’t have drinking water, or go back to Chad where there is no money?” Lane Hartill, regional information officer for CRS in West Africa, said in a Feb. 8 telephone interview from Dakar, Senegal.

There is very little food available in Chad’s capital, N’Djamena, after a Feb. 2 and 3 rebel attack and “there is no access to cash” with banks closed, he said. Markets were looted in the fighting and food that is available is expensive, Hartill said, noting that an egg costs five times what it did a week earlier.

But the capital does have drinking water, and electricity has been restored in some areas, he said.

People who fled to Kousseri, Cameroon, just across the Chari River from N’Djamena, have been drinking from the river in desperation, he said.

At least 40,000 Chadians are estimated to have crossed into Cameroon.

Some are responding to the call by Chad’s President Idriss Deby to return to Chad, “and with things changing all the time, it’s impossible to give accurate numbers,” Hartill said.

“The Catholic Church in Kousseri, the local government, United Nations, and aid agencies are all scrambling to work out temporary and longer-term measures to host people,” CRS said in a Feb. 6 statement from Dakar.

The agency is working with its partners in Cameroon to assess the needs of the refugees in the border areas of the country, the statement said.

In early efforts to help, “the local Catholic Church in Kousseri was housing some 7,000 refugees in its school, health center and presbytery,” it said, noting that the Diocese of Yagoua, of which Kousseri is a part, has bought rice “and will start initial food distributions.”

Before his Feb. 3 evacuation to Belgium, CRS Chad country representative Christophe Droeven was one of about 200 people trapped in a French school in N’Djamena, with a gunbattle about 30 yards from the building.

“The walls were shaking and everyone was crouched under the tables,” Droeven said in the CRS statement.

“We opened the windows so they didn’t shatter on us, and we were talking to the children, trying to keep them calm. We were under the tables for seven hours,” he said.

Hartill said the CRS office “was looted, with all computers and equipment taken and vehicles completely stripped.”