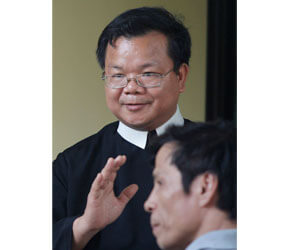 HANOI, Vietnam – Redemptorists at a Hanoi parish have urged local Catholics to keep calm after a mob led by government officials attacked a convent and church in early November.

The Asian church news agency UCA News reported tens of thousands of people attended 10 special Masses celebrated Nov. 5-6 at Thai Ha Church in the capital. Each Mass was attended by an estimated 3,000-5,000 people.

During the Masses, priests told parishioners about the attacks and appealed to them to stay calm.

On Nov. 3, around 100 people, accompanied by security officials and members of the press, attacked the convent. They damaged a gate and verbally abused and physically assaulted several Redemptorist priests and laypeople.

They fled after the church’s bell rang out, bringing many people to the scene, UCA News reported.

“We strongly condemn this violent, rude and organized attack,” Redemptorist Father Joseph Nguyen Van Phuong, parish pastor, told one congregation. He urged them to “forgive them and avoid retaliation.”

He said the motive behind the attack probably stems from an ongoing dispute with the government over seized church property.

“We are determined to fight for church property in a peaceful way and urge the government to punish the rioters,” he added.

Local state-run media reported the attackers were locals who were angry at parish opposition to a government-run sewage treatment project close to the nearby Dong Da hospital.

Church sources told UCA News that on Oct. 27 about 40 Redemptorists and parishioners took to the streets to oppose the project and demand the return of several of the hospital’s buildings, which had been convents from 1931 until the government “borrowed” them in 1959.

The same sources said the authorities plan to demolish the buildings.

On Nov. 7, hundreds of local Catholics marched to the headquarters of the People’s Committee in Quang Trung ward to demand the authorities respect private ownership and return what they say belongs to the church.

They said 97 old church facilities in Hanoi are in the hands of the government.