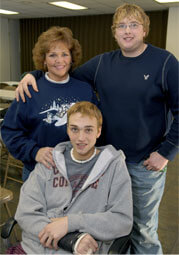 PICKEREL, Wis. – Charlie Neitzel’s passion for working on automobiles helped land him a job this year at Northern Fiber Works in Crandon, where he built fiberglass race truck parts. “I like building stuff with my hands,” said Neitzel, 21.

His dream job ended in a nightmarish fashion shortly after 2:30 a.m. Oct. 7, when Neitzel joined his best friend, Aaron Smith, 20, at a house party in Crandon, a community of about 1,900 people located 110 miles northwest of Green Bay.

The shooting rampage left everyone at the party, except Neitzel, dead. Peterson, an off-duty Forest County sheriff’s deputy and part-time Crandon police officer, took his own life later that day.

Today, Neitzel is recovering at home from the three gunshot wounds he received. He uses a wheelchair and relies on his mother, Carole, and brother Cyle, 18, to help him get around. His days are spent traveling to medical appointments, or watching television at home and remembering the friends he lost.

During an interview with The Compass, newspaper of the Green Bay Diocese, Charlie and Carole Neitzel recalled the tragedy in Crandon and how their lives have changed. They spoke to the paper at St. Mary Church in Pickerel, where Carole attends Mass occasionally.

While Charlie Neitzel wonders how God allowed such a tragedy, his mother thanks God for protecting her son.

The three gunshots did extensive damage to his right elbow, right leg and right shoulder, shattering the bones. He had a metal rod inserted in his leg, from his knee to his hip. The wounds required six surgeries.

Neitzel spent 10 days in the hospital. He said he was overwhelmed by the cards and letters he received.

“It’s awesome. I never thought I would get that many phone calls, that many cards, from all the people that were praying for me,” he said. “It’s good. It keeps me going, I guess.”

The get-well cards and telephone calls have stopped coming, but Neitzel continues his recovery. He is on five different prescriptions, requiring frequent trips to the pharmacy, besides his many medical appointments.

The family has received financial support from the community, and it has helped, said his mother, who has taken an unpaid leave of absence from her job as a certified nursing assistant to care for her son.

“The three of us live in a small house and I’m pretty much the only one making the payments,” she said. “I don’t make enough, so I (recently) put the house up for sale. And now I took it off the market. … With all of the donations, we’re able to pay the house payment. It’s actually made a lot of good changes.”

She thanks God for saving her son.

“I believe that God saved Charlie for a reason and he has a plan. We just don’t know what it is,” she said.

“It’s just hard for me to believe in God. I do believe in God, but if there is a God, why would he do that? What’s the point?” he asked. “It’s hard not to question. My best friends all died.”

Neitzel said he has talked to all of the families who lost a son or daughter. He said he doesn’t dwell on the tragedy, but doesn’t hide from it either.

Instead of focusing on that fateful night, when six young friends perished at the hands of one of their own troubled friends, Neitzel said he prefers to remember other times with his friends.

“I don’t remember that (night) because I want to remember what we did, who they were and all the good memories. Not watching them die,” he said.