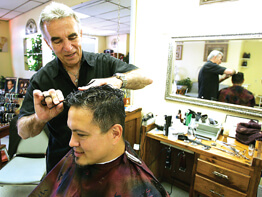 When Ralph Petti reflects on the rosaries and chaplets he crafts, the recovering alcoholic likens the distinctive technique of the labor to his steps of sobriety – one bead and one prayer at a time.

The 67-year-old self-proclaimed mechanical misfit doesn’t know what inspired him to begin making his decorative religious prayer aids early on in his recovery, and no one was more surprised than he was when he found the process therapeutic and enriching.

The finished products are either sold in his Edgewood hair salon or given to charitable causes.

“I’m not mechanical at all and never made things before. I can’t even turn a flashlight on,” he said with a chuckle. “I heard about rosary making on (a religious radio program), and something made me call and order the catalog.”

Mr. Petti’s transformation from a seemingly hopeless alcoholic living on the streets in Florida to the now devout Catholic whose ornate religious relics have contributed financially to Catholic institutions like St. Leo, Little Italy, was long and arduous.

Baptized at St. Leo in 1940, he grew up in Northeast Baltimore, worshipped and was educated at St. Katharine of Siena, took his first drink at the age of 15 and dropped out of high school before his 17th birthday.
By the 1960s, Mr. Petti had married, established a thriving barbershop in Rosedale and became a proud father of three.

With a family history of alcoholism, his liquor consumption grew as fast as his fortunes, and by the mid 1980s his world began to crumble.
His marriage to Marcia Petti fell apart, and he had been charged with driving while intoxicated. He lost his home, and by 1986 he sold his once-prosperous business to one of his employees. His next move was to leave his friends and family for Florida and spend several months homeless in the sunshine state.

Making his way back to the Baltimore area later that same year, Mr. Petti managed to convince the woman who bought his business to give him a job and a basement room in her home in which to live.

“When I came back to Baltimore, I was still crazier than a bedbug,” he said.
A short time later, one of his clients took him to an Alcoholics Anonymous meeting, but he went on a drinking binge within an hour.

However, within a few days, he woke up, called someone from AA and asked for help. The person on the other end of the phone suggested he say a prayer to help him get through the next few hours before they could get him to a meeting.

“I used to think God was for weak people,” Mr. Petti said. “But that prayer got me through. It gave me hope. It used to be when I prayed I was just saying the words. This time I really meant those words and could feel a connection with God.”

At the age of 47 he began to rebuild his life, opened a small barbershop in Edgewood, met Maria –a devout Catholic woman he would marry in the early 1990s who led him back to the church. He also re-established relationships with two of his children and other family members.
He and his wife live in Perryville and are active parishioners of the Cecil County parish Good Shepherd.

When Mr. Petti first started crafting his rosaries and chaplets, he gave them away to his customers, family members, friends and acquaintances.
He also started to donate them to St. Joseph Medical Center in Towson for the sisters to give to patients, and in the last couple of years he began to sell them in his now expanded “Ralph’s Family Hair Shop” and at the Baltimore Italian Festivals, with the event proceeds going to St. Leo.

He currently sells between 20 and 30 a month. Sometimes he custom-makes religious bracelets, rosaries, chaplets – some complete with the seven sorrows of Mary – for those who request it, prices ranging from $10 to $20.
“I hate to charge people for these, especially Catholics, because it’s a tool to strengthen our spiritual growth,” Mr. Petti said. “But, I did need to find a way to pay for the materials.”

Mr. Petti’s cousin Ralph Patinella – a 49-year-old Fallston resident and St. Joseph, Cockeysville, parishioner – didn’t realize his beloved relative had re-embraced his Catholic faith until he was getting his hair cut one day in the 1990s.

“Ralph started talking about his rosaries while he was cutting my hair, and the spiritual growth I noticed in him was staggering,” Mr. Patinella said. “I knew he had been sober for quite a while, but the peace I saw in him at that moment made me see that he was happier and more complete than I had ever seen him.”

In the 21 years since he embarked on his last alcoholic bender, Mr. Petti has stayed active in AA, has sponsored about 10 newcomers over the years and is painfully aware that he is one drink away from returning to the bleakness that was once his existence.

“I couldn’t have done any of this without God’s help,” he said. “If my rosaries and chaplets bring others closer to God, then I’ve been a success.”