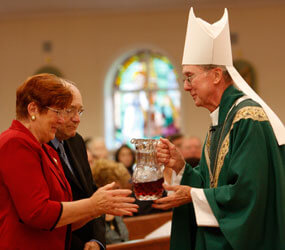 WASHINGTON – The economic recession may have a “silver lining” in terms of its effect on U.S. marriages, according to a leading marriage expert.

“Judging by divorce trends, many couples appear to be developing a new appreciation for the economic and social support that marriage can provide in tough times,” said W. Bradford Wilcox, director of the National Marriage Project at the University of Virginia, in a report on “Marriage in America: The State of Our Unions 2009.”

Wilcox, who also edited the report released Dec. 7, said millions of Americans have adopted what he called “a homegrown bailout strategy” and “are relying on their own marriages and families to weather this economic storm.”

He said marriages also have been strengthened by a decision by many couples to shed credit card debt, with Americans decreasing their collective revolving debt by $90 billion in the past year, according to the Federal Reserve Board.

Wilcox said the recession had revived “the home economy,” with more Americans growing their own food, making and mending their own clothes and eating at home more often.

“By fostering a spirit of economic cooperation, family solidarity and thrift that redounds to the benefit of marriage, the Great Recession appears to offer a silver lining for marriage,” he said.

The report, focusing on the general theme of how money affects marriage, was published jointly by the National Marriage Project and the Center for Marriage and Families at the Institute for American Values. It marked the 10th year since the annual reports began.

In another article, Jeffrey Dew, an assistant professor of family, consumer and human development at the University of Utah, argued that thrifty couples have the best chance of having happy marriages.

Calling credit card debt “an equal-opportunity marriage destroyer,” Dew said, “It does not matter if couples are rich or poor, working class or middle class. If they accrue substantial debt, it puts a strain on their marriage.”

Conversely, couples who save and accrue assets have stronger ties and are less likely to divorce, he said.

Citing a 2008 study in the journal Financial Counseling and Planning, he said those who feel their spouses do not handle money well “report lower levels of marital happiness.”

In another study, Dew said, “feeling that one’s spouse spent money foolishly increased the likelihood of divorce 45 percent for both men and women. Only extramarital affairs and alcohol/drug abuse were stronger predictors of divorce.”

Alex Roberts, an affiliate scholar at the Institute for American Values, said that although the economic downturn has affected marital trends in both the number of marriages and the number of divorces, the effect may not be lasting.

“When a couple decides to postpone a marriage or divorce due to a recession, it does not usually mean their desire ultimately to wed or split is reduced,” he wrote. “It appears that much of this decline in divorce is indeed being driven by postponement.”

Because both marriage and divorce can be expensive, Roberts said, many couples “will have to remain in a holding pattern while the economy is weak.”

“But after the end of this downturn is reached, we can expect that rates of marriage and divorce will at some point climb back upward,” he added.

In an article titled “The Smart Money: She Saves, He Spends,” Ronald T. Wilcox, a faculty fellow at the National Marriage Project and professor of business administration at the University of Virginia, suggested that the pattern of money management in most marriages should be changed.

“For many married couples, husbands should take a more active role in setting weekly or monthly spending budgets and in actually performing the necessary shopping,” he wrote. “Even if they don’t enjoy doing it, it is that natural aversion to the activity that is likely to lead to stronger household balance sheets.”

Wives, on the other hand, should be in charge of long-term financial planning and handling the family’s investments, Ronald Wilcox recommended. “They should take a passive approach to investing, setting up the investments and changing them infrequently, an approach their husbands would be less likely to employ,” he said.