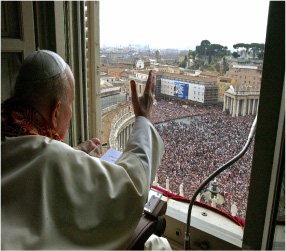 VATICAN CITY – The church is preparing to mark the fifth anniversary of the death of Pope John Paul II, an event that stirred intense emotion, expressions of faith and worldwide attention in April 2005.

At the Vatican, a Mass celebrated by Pope Benedict XVI will offer an occasion to look back and remember a pontificate that has not, and could not, be forgotten. Pope John Paul shaped the policies and charted the directions for the church in the 21st century, and his German successor has very much stuck to the same course.

The next big event commemorating Pope John Paul is expected to be his beatification, which could occur as early as next fall. But in hundreds of other ways, from the documents he wrote to the vocations he inspired, his legacy lives on daily in his church.

Pope Benedict references Pope John Paul often, as when he recently praised the Sahel Foundation established by the late pope or quoted amply from one of his letters to young people in his own message for World Youth Day.

From the beginning, Pope Benedict made clear that he would carry out his papal ministry under the banner of continuity.

“We feel reverberating within our hearts his repeated invitations to advance without fear on the path of fidelity to the Gospel, to be heralds and witnesses of Christ in the third millennium,” Pope Benedict said in 2006.

Pope Benedict will celebrate a memorial Mass for Pope John Paul March 29, because the April 2 anniversary of his death falls on Good Friday. The liturgy is in St. Peter’s Basilica, not the much larger square outside, and there’s been no Vatican effort to turn this into a mega-event for the mass media.

That doesn’t mean the huge crowds and the global interest of five years ago have been forgotten, however. Pope John Paul’s final days are recalled by many as a time of special grace.

The late pope made his final public appearance March 30, 2005, when he was recovering from a tracheotomy to relieve breathing problems. He blessed pilgrims in St. Peter’s Square and tried in vain to speak to them. After a few minutes, aides wheeled him from view and drew the curtains of his apartment window for the last time.

Those who witnessed the scene sensed it was a farewell, and an incredibly poignant one. The Vatican later described it as “the last public ‘station’ of his painful Via Crucis.”

The next day, the pope suffered septic shock and heart failure. He was treated immediately with antibiotics and respiratory equipment, but his condition deteriorated. Vatican officials later said it was the pope himself who decided to be treated at the Vatican instead of being taken to the hospital again.

An Italian cardinal who visited the dying pope described the scene in the papal bedroom: Assisted by several doctors and his personal staff, the pontiff lay serenely on a bed in the middle of his room, comforted by cushions, occasionally opening his eyes in greeting to the handful of visitors allowed inside.

Outside, in St. Peter’s Square, the first groups of faithful – many of them young people – assembled to pray and sing songs beneath the pope’s window. Some 48 hours later, the vigil had grown to include some 100,000 people.

On the afternoon of April 2, according to his aides, the pope murmured in Polish, “Let me go to the house of the Father.” They were his last words. Six hours later, at 9:37 p.m., Pope John Paul died.

The announcement was made to the vast crowd in St. Peter’s Square shortly before 10 p.m., at the close of a candlelit prayer service. Many in the crowd wept. Then, after a long wave of applause, the square was enveloped in silent prayer. The bells of St. Peter’s Basilica tolled a death knell.

In Pope John Paul’s native Poland, the bells tolled and air-raid sirens were sounded. On Polish TV, commentators were in tears as they announced the pope’s death.

What happened in the hours and days to follow surprised Vatican officials. For one thing, people did not leave St. Peter’s Square after the death announcement – they stayed and prayed well into the early morning. And by the next day, it was clear that many, many people wanted to pay their respects to Pope John Paul in person.

Eventually, more than 2 million mourners came to view the pope’s body as it was laid out in St. Peter’s Basilica. They came from every continent. Some waited in line as long as 12 hours, and many took photos on their cell phones when they approached the papal bier. That broke with tradition, but it seemed fitting.

The unprecedented global media coverage hit a peak at Pope John Paul’s funeral, presided over by Cardinal Joseph Ratzinger, the dean of the College of Cardinals and soon to be the next pope. In retrospect, the transition seemed to have already begun, though the conclave was still 10 days away.

In his homily at the funeral Mass, Cardinal Ratzinger drew long applause when he imagined Pope John Paul standing at the “window of the Father’s house” and blessing the crowd below. Even after five years, many Catholics keep that image in their hearts.