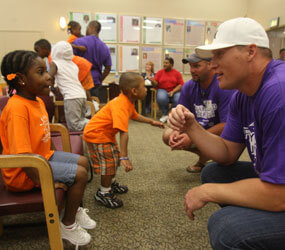 John Harbaugh took one look at a group of children who attend Good Samaritan Hospital’s Child Development Center and said “OK, we’re going to put these guys through a drill.”

The children sat on chairs in a conference room in the Baltimore hospital, awestruck at who stood before them.

Behind the children was a screen that showed a live camera feed from outside the hospital. A playground was coming together quickly, thanks to about 60 Ravens players, coaches and staff members, Good Samaritan volunteers and the non-profit group KaBoom!

The play area was being built for the 50 children served each day at the center. Many have parents who work at the hospital.

The Ravens provided grant money to help build the playground.

Jeffrey Matton, the hospital’s chief operating officer, said the partnership with the team was vital.

“The kids are going to have a great playground,” Matton said. “The Ravens represent Baltimore and we like to think we’re a pillar of northeast Baltimore.”

Back in the hospital, Harbaugh had created an imaginary line of scrimmage. The children stood next to him, his players lined up on the other side.

When Harbaugh said, “Hike!” the children tackled the players to the ground. Laughter filled the room.

The players also took a tour of the hospital, meeting patients and employees. Flacco and Rice comforted one man who found out earlier in the day he needed a heart transplant. The man, only in his 20s, had a tattoo of the Ravens’ logo on his arm.

“That changed my life right there,” Rice said after the meeting. “That’s crazy. I told him we’re pulling for him.”

Harbaugh and Flacco each talked with Joe O’Donnell, who is being treated for cancer. O’Donnell’s daughter, Laura, is the vice president of human resources at Good Samaritan.

As Flacco approached, Joe O’Donnell remarked: “You’re one of those chickens.”

The Blue Hens are the mascot of the University of Delaware, where Flacco first reached football stardom.

Laura O’Donnell said the interaction “meant everything” to her father.

Outside, the playground was completed in just eight hours. Using design input from the children who attend the center, it replaced the original, outdated playground.

KaBoom! helps build play areas throughout the country. The group aims to have playgrounds within walking distance of every child in the United States.

KaBoom! Project manager Mike Dunn said: “When you see everything completed, nothing beats that feeling.”