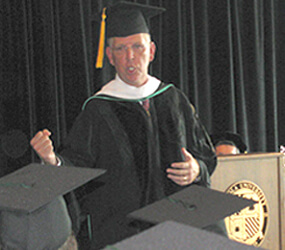 When Christopher Basler envisioned his graduation from Loyola University Maryland, he didn’t see it occurring in a small conference room with about 60 people in attendance.

It certainly didn’t include having an NFL coach delivering a commencement address that bordered on pre-game speech.

Yet, that’s exactly what happened May 13 and Basler didn’t want it any other way.

A midfielder on Loyola’s men’s lacrosse team, Basler and 11 teammates received their Loyola diplomas two days early. Their first-round game in the NCAA tournament, May 15 at Cornell University in Ithaca, N.Y., conflicted with the university’s commencement at 1st Mariner Arena.

Baltimore Ravens offensive coordinator Cam Cameron was asked on short notice to deliver the commencement address for the lacrosse players.

“I never thought that’s how I would graduate college, but it was fun though,” said Basler, of Seaford, N.Y. “At least it wasn’t three hours long.”

Cameron told the lacrosse players that he regularly attends games with his three children. The Indiana-native grew up on football and basketball, but his children play lacrosse in their backyard with a net to shoot in each day.

A convert to Catholicism, Cameron told the players how important faith was to him and how valuable a Catholic is in society.

Before long, Cameron transitioned into an intense pre-game speech that had players and coaches ready to take the field. He said scouting reports on the team were dismissive, with words like “scrappy,” being tossed about.

“Go out and do what you were coached to do,” Cameron said. “Trust who you are. Give me some eyes. Know what you’re about and play like Daniel would play – with the heart of a lion.”

Given the program’s tradition, coach Charlie Toomey said this wasn’t the first time lacrosse seniors have had to walk early due to scheduling conflicts.

“It just shows you how special of a place Loyola University is that they would be willing to put a ceremony like this together for our seniors,” Toomey said.

Toomey said the bond between coach and player starts during recruiting in the junior year of high school.

The team then boarded a bus for New York, ready to begin their NCAA journey. Basler said Cameron had him ready to play.

“I can’t even imagine him coming into our locker room before a game,” Basler said. “He’d have us all jacked up. It was a privilege to have him here. It was exciting”