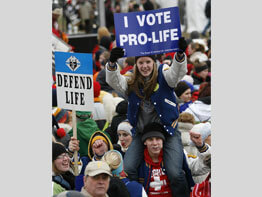 Abortion opponents also will hold multiple events in the nation’s capital and throughout the U.S. the day before and the day of the official 2009 March for Life, as well as the following days.

The main event will begin with a noon rally on the National Mall, followed by a march along Constitution Avenue that will end at the U.S. Supreme Court. From there, participants are encouraged to meet with members of Congress to lobby on abortion-related issues.

With millions expected in Washington for inauguration events the week of Jan. 19 and the thousands of participants anticipated for the march and related activities, organizers said it will be a “crazy week” in the nation’s capital.

The theme of this year’s march is “Remember – The Life Principles Mean ‘Equal Care’ With No Exceptions,” meaning the intentional killing of even one unborn human is never justified or necessary, the Web site said.

Organizers are also stressing that the U.S. must provide equal care for both a pregnant mother and her unborn child.

The National Prayer Vigil for Life will begin with a 7 p.m. Mass Jan. 21 at the Basilica of the National Shrine of the Immaculate Conception in Washington, and conclude with a 7:30 a.m. liturgy Jan. 22. Cardinal Justin Rigali of Philadelphia, chairman of the U.S. bishops’ Committee on Pro-Life Activities, will celebrate the evening Mass and Bishop Paul S. Loverde of Arlington, Va., will be the principal celebrant for the morning Mass.

For the first time since the all-night vigil has been held, the U.S. Conference of Catholic Bishops will direct people who won’t fit into the basilica for the events to similar Masses within walking distance, said Deirdre A. McQuade, assistant director for policy and communications for the USCCB’s Office of Pro-Life Activities.

“We estimate that 12,000 people were at the vigil last year,” McQuade told Catholic News Service Jan. 5. “If we have such a crowd this year, we may not be able to accommodate everyone in the basilica. So, we’re making sure they have a place to worship close by. We want everyone to have an opportunity to participate.”

Earlier on Jan. 21 the Sisters of Life will host an afternoon of prayerful remembrance and intercession at the Crypt Church of the basilica from 1-4 p.m. to allow men and women whose lives have been affected by abortion to pray and seek God’s healing and forgiveness, Ms. McQuade said.

Several other events will take place in Washington and around the country to mark the anniversary of the Supreme Court’s 1973 decision.

From 10 a.m. to 4 p.m. Jan. 21 the Cardinal O’Connor Conference on Life will be held at Georgetown University in Washington; the conference is intended to educate college and high school students.

On the morning of the annual March for Life, the Washington Archdiocese expects more than 20,000 Catholic teens and young adults from all over the U.S. to attend its youth rally at the Verizon Center, Washington’s largest sports arena, from 7:30-11:30 a.m., with a 10 a.m. Mass celebrated by Washington Archbishop Donald W. Wuerl.

The Filipino Family Fund and Culture of Life Foundation will host the third annual “Champions for Family” awards reception Jan. 22 at the Phoenix Park Hotel in Washington. Honorees include U.S. Rep. Joseph R. Pitts, R-Pa.; Dr. Rene Bullecer, who heads Human Life International in the Philippines; and Father Jerome Magat, parochial vicar at Our Lady of Lourdes Catholic Church in Arlington, Va., and founder of the Guadalupe Free Clinic, a free medical clinic for the poor.

On Jan. 23 the American Life League will hold a conference from 7:30 a.m.-3 p.m. at the Liaison Capitol Hill Hotel in Washington, followed by a 6 p.m. concert sponsored by Students for Life of America and featuring Barlow Girl and Laura Ingraham.

“David Bereit is a hero in the pro-life movement,” Ms. Hahnenberg said in a statement. “His dedication to ending abortion through regular, peaceful presence outside of Planned Parenthood facilities and other abortion clinics has sparked a passion in thousands of people for protecting and defending the pre-born.”

Events across the U.S. will include the ringing of all Catholic church bells within the Diocese of Wichita, Kan., at 3 p.m. Jan. 22, said Tama Dutton, director of the diocese’s Respect Life and Social Justice Office.

“We hope that as the bells are ringing that the faithful will stop to pray for all the women, fathers and families who have been affected by abortion,” Dutton said.

The Walk for Life West Coast will be begin at 11 a.m. Jan. 24 at the Justin Herman Plaza in San Francisco. The 2.5-mile journey will end at the city’s Embarcadero’s Marina Green.

Founded in 2005, the event drew 25,000 people from across the country last year. The Walk for Life West Coast group was promoting the 2009 walk with a 20-foot-by-60-foot billboard in front of the San Francisco-Oakland Bay Bridge, said Eva Muntean, who co-chairs the event.

“San Francisco is a beautiful city, but there is a lot of sadness beneath the surface,” Muntean said. “Until recently we had more abortions than live births, and a high percentage of our population has experienced abortion. We need to reach those women and men who are hurting, and this seemed like the most effective method.”