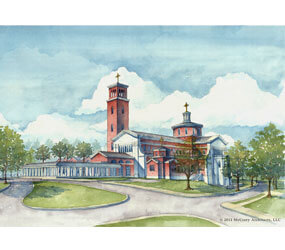 RALEIGH, N.C. – A new 2,000-seat cathedral is the centerpiece of a 39-acre campus being planned by officials of the Diocese of Raleigh.

Bishop Michael F. Burbidge said Sept. 7 that the project, estimated to cost between $75 million and $90 million, will include a two-story gathering hall and a three-story parking facility that will be built partially underground on land owned by the diocese, three miles west of downtown Raleigh.

The new church will be called Holy Name of Jesus Cathedral and will be built on land owned by the diocese for more than a century. Diocesan offices already are located on the eastern edge of the property.

“We are not just building a beautiful, glorious, magnificent church, which it will be. We are building a vibrant campus,” Bishop Burbidge said in announcing the project, which he called “monumental and historic” in the life of the diocese.

Through early September, the diocese had raised $10 million in pledges from a small group of donors and Bishop Burbidge said he expects that, despite the sluggish U.S. economy, the diocese will be able to raise an additional $15 million to $20 million needed so that construction can begin.

Bishop Burbidge said a larger cathedral became necessary because of the rapid growth in the number of Catholics in the 54-county diocese since 2000. He reported a 42 percent jump in the registered Catholic population during the period, rising to 217,125 people. Another 200,000 unregistered Catholics, mostly Hispanics, also are in the diocese, the bishop said.

Sacred Heart Church, two blocks from the North Carolina Capitol in downtown Raleigh, was designated as the diocesan cathedral when the diocese was erected in 1924. Built in the early 1920s, the church seats 320 people.

Bishop Burbidge promised that Sacred Heart’s outreach ministries to the city’s poor residents will continue after the new cathedral opens.

The project has received support from elected officials at the local and state levels, according to the bishop.

“I think it is important to note that we have said to our neighbors and to the mayor and to the governor that we want to make this cathedral campus project something, of course, that our diocese, the Catholic Church, the church in the United States is so very proud of,” he said.