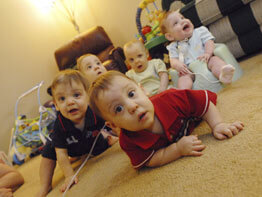 OLATHE, Kan. – It takes a village to raise a child.

When Kate and David Brooks found out they were expecting for the second time, they had no idea how true those words would become for their family.

Shortly thereafter, the couple found out that Kate was carrying not one, but five babies. Quintuplets.
“It was shocking, numbing, and exciting all at once,” said Kate. “The first two weeks after we found out about the pregnancy were overwhelming. I kept thinking, ‘What am I going to do?’“

The options given to the Brookses, who were already parents to 1-year-old Mallory, were to reduce the pregnancy to two or three babies, terminate the entire pregnancy or carry the pregnancy as it was to term. The doctors gave them a few weeks to make a decision.

“My husband and I were really on our own journeys over those few weeks – just overwhelmed,” Kate said in an interview with The Leaven, newspaper of the Archdiocese of Kansas City. “I had gone to church one Sunday and the opening music was ‘The Servant Song.’“

So despite the enormity of the task, the Brookses charged ahead and made plans for the five babies.

The quintuplets were born Oct. 10, 2006. Emily, Owen, Jesse, Ruth, and Helen all made their appearance into the world – in that order – each weighing around 2 pounds, 8 ounces. As premature babies, they required some extra care and time in hospitals – each for different problems.

“The past year has been a blur,” admitted Kate. “It’s all about them. Having them has taught me a lot of patience. I have to let the little things go and just enjoy these babies.”

Meeting the needs of five newborns and a toddler created some unique challenges for the family.
Having five infants at once required a few more sets of hands than just Mom and Dad, so the Brooks family has relied on a steady parade of volunteers from the day the first baby came home.
Alyce Yoksh began volunteering with the Brooks family in April, with her 8-year-old daughter Amanda. The two have helped with everything from bathing the babies to entertaining one baby at the hospital while another is receiving treatment.

“We really enjoy helping out – they have become like our extended family,” said Yoksh, a parishioner at Prince of Peace in Olathe. “It’s always a special time to go see what the kids are doing and catch up with Kate and David.”

Kay Osborn was the Brooks family’s first volunteer and has come to be such a part of their life that she is referred to as “Grandma Kay.”

“I’ve done a lot of rocking, feeding and changing diapers. I especially love helping the family any time they leave the home,” Osborn said.

She first found out about assisting the Brooks family though her daughter’s neighbor, who is a member of St. Agnes Parish in Roeland Park.

Volunteers have come largely from St. Agnes, the family’s parish at the time of the babies’ births, and now also from Prince of Peace, where the Brookses moved last spring.

Kate estimates 30 individuals are in the family’s home on a weekly basis, ranging from teenagers to grandparents. Kate’s sister, Judy, coordinates the volunteer shifts via e-mail.

Osborn, who lived within five minutes of the family when they were in St. Agnes Parish, now gladly drives 25 minutes each way to help out in Olathe. She has plans to move to Harrisonville, Mo. – which will be a 55-minute drive to see the quintuplets – but intends to continue her schedule of volunteering with the family two to three times a week.

“With all things, the more you give, the more you receive,” Osborn said. “This family has given me back so much; they are a wonderful blessing to me.”