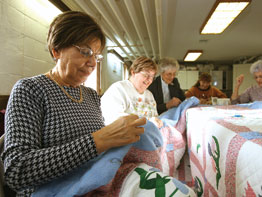 In a sun-splashed room in the lower level of the rectory, the St. Charles Quilters are facing a deadline.

The queen-sized quilt spread across the table features white squares, each section exquisitely hand-stitched. But the binding isn’t finished and the blue-flowered borders need to be stitched by early December when the quilt will be the grand prize at the St. Charles Borromeo, Pikesville, festival.

The quilters aren’t worried; in fact, they’re laughing because for 18 years they’ve always managed to get it done.

One year, a bit of stitching came loose just before the raffle, and at the festival Pat Long was in the corner, sewing like crazy.

The women aren’t too worried if there’s a tiny flaw, because, as Maria Bortot frequently points out, people buy a raffle ticket for a dollar and what do they expect for a dollar?
In fact, the quilts are gorgeous, made with three layers and tiny precise stitches, and they usually bring in between $1,500 and $1,800. The group also creates a child’s quilt and another item, such as a wall hanging, runner or tree skirt that are part of the drawing.
It takes all year for the group of nine women to make the main quilt. They decide together on the design, which they do themselves.

“Whoever talks the loudest gets to choose,” says Cathy Bonnen.

The group began 18 years ago when Cecelia Fold, who jokingly has the title of quilting queen, began taking quilting classes. Meanwhile, the parish put a notice in the bulletin asking if anyone could make a quilt to commemorate the parish. Ms. Fold took on the project, and the St. Charles Quilters were born.

Each square of the commemorative quilt depicts something about the parish. One square, which shows a Daughter of Charity, was made from a scrap of cloth from a habit, another featured a picture of the church, and still another had the name of every pastor. The quilt was such a success that the group had trouble parting with it.

“We were going to raffle it and we changed our minds,” said Margaret Cassaday.
Today, the quilt hangs in the church’s vestibule.

While the primary reason for quilting is to raise money for the church, the social aspect hasn’t changed since the days when all quilts were made by hand. Although they’ve lost some members over the years, the group enjoys the camaraderie of their weekly quilting session.

“We really have a good time; we’re like family,” Ms. Vespignani said. The group gained a new member this year when Delores Sykes decided to take up quilting.

“I knew nothing about quilting,” she said as she picked up her needle and placed tiny stitches on the border of the quilt. “But my grandmother lived with us and I always admired her quilts. When I heard about this, I said, ‘I can make a contribution.’ I’m learning.”