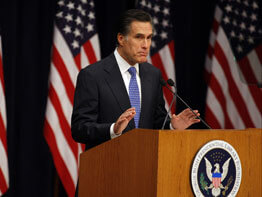 WASHINGTON – When Arizona Rep. Morris Udall sought the Democratic nomination for president in 1976, the fact that he was a Mormon, albeit an inactive one, was barely mentioned.

When former Michigan Gov. George Romney in 1968 went after the Republican nomination for president, his active membership in the Church of Jesus Christ of Latter-day Saints, the formal name of the Mormon church, didn’t cause a ripple in the press, or, apparently, play a role in his campaign.

But Romney’s son, Mitt, the former governor of Massachusetts who is seeking the 2008 Republican presidential nomination, felt pressured enough by persistent questions about his being a Mormon that he gave a highly publicized speech about faith Dec. 6.

The address at the George Bush Presidential Library in College Station, Texas, channeled a speech given in 1960 to the Greater Houston Ministerial Association by then-Sen. John F. Kennedy, who was battling stereotypes about Catholics.

Romney gave scant attention to the tenets of Mormonism, pointing only to the belief that “Jesus Christ is the Son of God and the savior of mankind.” He acknowledged that “my church’s beliefs about Christ may not all be the same as those of other faiths … . These are not bases for criticism but rather a test of our tolerance.”

Romney said no candidate should be expected to explain his church’s doctrines, for to do so “would enable the very religious test the founders prohibited in the Constitution. No candidate should become the spokesman for his faith. For if he becomes president, he will need the prayers of the people of all faiths.”

For his part in 1960, Kennedy said he believed in “an America where the separation of church and state is absolute, where no Catholic prelate would tell the president – should he be Catholic – how to act, and no Protestant minister would tell his parishioners for whom to vote” and where “no public official either requests or accepts instructions on public policy from the pope … or any other ecclesiastical source, where no religious body seeks to impose its will directly or indirectly upon the general populace or the public acts of its officials, and where religious liberty is so indivisible that an act against one church is treated as an act against all.”

Despite their similarities, the two speeches were important for different reasons, analysts say.

Like Kennedy, Romney is the first member of his church to have a viable shot at his party’s presidential nomination, noted Richard Ostling, a former Associated Press and Time magazine religion reporter who recently wrote a book, “Mormon America: The Power and the Promise,” with his wife, Joan.

Romney’s chances naturally bring questions, especially since Mormons – who make up just 2 percent of the U.S. population – are still little known to most Americans, he said.

Also what is different today from when Udall and the elder Romney ran for president is that the Republican Party’s successful courting of conservative evangelicals has created a constituency of voters who pay close attention to a candidate’s religious beliefs.

“Religious activism is very much in the public spotlight, especially since 1980,” said Ostling.

Mainline Protestants, Catholics and Jews for generations had been involved in public policy, he noted. But the rise of the Moral Majority and other evangelical Protestant groups in the 1970s and their effectiveness at turning out voters beginning in 1980 means that especially in the Republican Party the views – and votes – of evangelicals are highly valued.

Polling questions typically ask how a voter would feel about electing candidates of certain types who represent actual candidates: a woman, an African-American, a Catholic, someone who’s been divorced multiple times, he explained.

“The one who got the highest negatives other than an atheist or a homosexual was a Mormon,” said Wayne.

Evangelicals in particular balk at some Mormon tenets, including their acceptance of the Book of Mormon as being on a par with the Bible and beliefs such as the existence of a “Heavenly Mother” who is God’s female partner, posthumous baptism and man being able to achieve a godlike state in heaven.

Former Arkansas Gov. Mike Huckabee, a Southern Baptist minister, has gained significantly in the polls in Iowa recently, and Wayne said Romney’s campaign saw a connection between the two polling results. That apparently led to the decision to have Romney talk about his religion, and hopefully prompt enough voters to swing the Iowa caucuses toward him.

Shaun Casey, a senior fellow at the Center for American Progress Action Fund and an ethics professor at Wesley Theological Seminary in Washington, said if Udall or George Romney were running today they would be subjected to the same questions about their faith, because evangelical Christians are now seen as the Republican Party’s base.

Casey, an adviser to the presidential campaign of Sen. Barack Obama, D-Ill., said he thinks Romney’s speech was intended at least as much for the national press who cover the election as it was for those Republican evangelicals. The next time someone asks Romney a question about religion, he can point to the Dec. 6 speech and say he has already addressed the subject, said Casey.

Doubts about whether someone’s Mormon faith is a factor for enough voters to affect the election won’t be settled until at least after the Iowa caucuses Jan. 3, said Casey and Wayne.

“If Romney wins in Iowa, the discussion is over,” said Wayne. “If he loses in Iowa the issue is still open.”

Editor’s Note: The text and streaming video of Mitt Romney’s Dec. 6 address are available online at: www.mittromney.com. The text and audio of John F. Kennedy’s 1960 speech to the Greater Houston Ministerial Association can be found online at: www.jfklibrary.org.