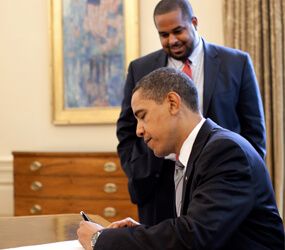 WASHINGTON – In the weeks since a Wisconsin federal judge ruled the National Day of Prayer unconstitutional, one thing has been certain: People have strong feelings both for and against prayer.

Although the day’s events will continue as planned May 6, its future is uncertain.

In her April 15 ruling, District Judge Barbara B. Crabb in Madison, Wis., said the day of prayer violated the First Amendment, but she postponed enforcement of the decision until all appeals were exhausted. The Justice Department announced April 26 that it will challenge Crabb’s decision in the U.S. 7th Circuit Court of Appeals in Chicago.

The day has a long history. It has been an annual event since 1953 and has been celebrated on the first Thursday in May since 1988. Attempting to do away with a tradition – and a faith one at that – is certain to cause a reaction.

Charles Haynes, senior scholar of the First Amendment Center in Washington, said politicians might even show up in greater numbers at the prayer-day events this year because not doing so, he told Religious News Service, would be akin to “being against apple pie and motherhood.”

Those on both sides of the issue have taken their views onto the blogosphere, online petitions, billboard advertisements and letter-writing campaigns, but the final word will probably only come after more courtroom battles.

The Freedom From Religion Foundation – the Madison-based group of atheists and agnostics that filed the 2008 lawsuit against the federal government over the day of prayer – has similarly bolstered their campaign efforts, despite the ruling in their favor.

Both groups are soliciting donations, collecting online signatures and urging supporters to contact governors and mayors either to continue with plans for the day or to refrain from participating in events or issuing proclamations.

On its website, the Freedom From Religion Foundation has ironically likened the prayer-day clash to a biblical struggle, saying their group is “in a David vs. Goliath battle.”

A Rasmussen Reports survey released April 23 found that 60 percent of Americans favor the federal government recognizing a National Day of Prayer, while 28 percent were opposed and 12 percent were not sure.

The day usually includes prayer services, rallies, breakfasts and walks in cities and towns across the country. People meet in churches, city halls, parks and shopping malls to pray or talk about the importance of prayer. Many of the nation’s governors and mayors have signed proclamations in support of the day’s events.

A spokesman for President Barack Obama said the president “intends to recognize a National Day of Prayer,” as he did last year when he issued a proclamation. The president did not host an observance at the White House last year, as President George W. Bush did throughout his presidency.

Only a few Catholic leaders have been vocal in their support for the National Day of Prayer.

Archbishop Jerome E. Listecki of Milwaukee told the Milwaukee Journal-Sentinel that Crabb’s ruling was a “missed opportunity to acknowledge our nation’s identity, which was founded on our dependence on God.”

Bishop Gerald A. Gettelfinger of Evansville, Ind., spoke in support of the prayer-day efforts at an April 28 news conference at the Evansville diocesan pastoral center. The bishop and Rabbi Helen Bar-Yaakov from Adath B’nai Israel Temple in Evansville urged people of all faiths to set aside their differences and focus on what they share in common.

This year’s National Day of Prayer events in Evansville will be at the town’s Freedom’s Monument, which is public property.

During the news conference, the bishop and the rabbi agreed that the prayer day does not interfere with separation of church and state but instead reinforces it. “As small as our community is, we have to recognize that we have many faith traditions,” the bishop said, adding that it “shows we’re part of a larger world.”

An editorial in the April 23 issue of The Criterion, archdiocesan newspaper of Indianapolis, said the ruling against the day of prayer should “open our eyes again to how a misguided viewpoint can potentially dismantle what has been a time-honored tradition.”

“Now is the time for people of faith to stand up” and show that their support for the National Day of Prayer, it added.

In her ruling, Crabb said government involvement in prayer is constitutional only if it does not call for religious action, which she said the prayer day does.

She said the day “goes beyond mere ‘acknowledgment’ of religion because its sole purpose is to encourage all citizens to engage in prayer, an inherently religious exercise that serves no secular function in this context. In this instance, the government has taken sides on a matter that must be left to individual conscience.”

The American Center for Law and Justice, which represented 31 members of Congress who joined the federal government as defendants in this case, described Crabb’s ruling as flawed.

“It is unfortunate that this court failed to understand that a day set aside for prayer for the country represents a time-honored tradition that embraces the First Amendment, not violates it,” said Jay Sekulow, chief counsel for the American Center for Law and Justice, in a statement.

Sekulow also said he thought the case would probably go the U.S. Supreme Court, and he predicted that if it does “we will carry the day, but it is going to be a close case.”

He also said it “very well may be decided by the next appointee to the high court.”