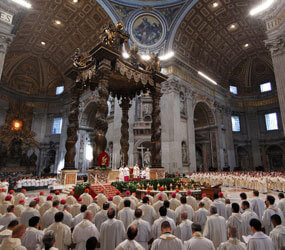 VATICAN CITY – Never stop searching for God and being open to receiving his love and wisdom, Pope Benedict XVI said.

“That restlessness for God, that journeying toward him, so as to know and love him better, must not be extinguished in us,” said the pope in his homily.

Presiding over the first of two Holy Thursday liturgies, Pope Benedict blessed the oils that will be used in the sacraments of baptism, confirmation, ordination and the anointing of the sick.

Deacons carried the oils in large silver urns to the main altar while catechumens, youths preparing for confirmation, the sick and deacons about to be ordained in the Diocese of Rome wheeled small tables carrying large, artistic urns, which also contained sacramental oils.

In his homily, the pope said the human heart is always restless “because whatever is finite is too little.” However, people must be careful that desire for more is channeled toward God, not earthly things and the quest for self-sufficiency, he said.

He asked that Christians understand that loving and knowing God is never over.

“Let us remain constantly on a journey toward him, longing for him, always open to receive new knowledge and love,” he said.

Pope Benedict underlined the importance of the church’s ministry of healing, not just for those afflicted by hunger, thirst, violence and illness, but also for the lonely, the persecuted and the broken-hearted.

The task of evangelization and proclaiming God’s kingdom is, in fact, “a process of healing,” he said.

By proclaiming God’s kingdom and God’s infinite goodness, hearts will be healed. If a person’s “relationship with God is disturbed, then all the rest is disturbed as well” and “we cannot truly be healed in body and soul,” he said.

While the church’s most fundamental form of healing is healing people’s hearts and souls by reconciling people with God, there is also the important vocation of being present with and caring for the ill and infirm, the pope said.

The pope thanked all those who care for the sick and recalled the legacies of St. Vincent de Paul and Blessed Teresa of Kolkata, saying Christian men and women who dedicate their lives and time to the suffering bear “definitive witness to the goodness of God himself” and make Christ manifest even without speaking of him.

He asked that all Christians make the living God present in today’s world by bearing witness to Christ and leading people toward him.

Being baptized is not something to brag about, he said, rather it should trigger the questions:”Are we truly God’s shrine in and for the world? Do we open up the pathway to God for others or do we rather conceal it? Have not we – the people of God – become to a large extent a people of unbelief and distance from God? Is it perhaps the case that the West, the heartlands of Christianity, are tired of their faith, bored by their history and culture, and no longer wish to know faith in Jesus Christ?”

Pope Benedict said that despite “the shame we feel over our failings, we must not forget that today, too, there are radiant examples of faith, people who give hope to the world through their faith and love,” particularly Pope John Paul II.

He said the late pope was “a great witness to God and to Jesus Christ in our day,” as well as a man who was filled with the Holy Spirit.