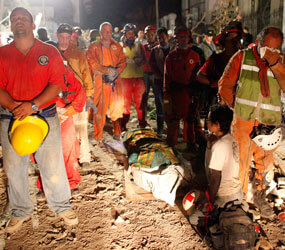 WASHINGTON – As they help Haitians rebuild destroyed homes and mourn lost relatives, Catholic Church workers in Haiti are grieving for members of their own “families” killed or severely injured in the magnitude 7 earthquake Jan. 12.

Although Archbishop Serge Miot of Port-au-Prince was the best-known Haitian Catholic leader killed in the quake, the losses also included some of the oldest and youngest members of the church community.

Salesian Brother Hubert Sanon, 85, the first Haitian to become a Salesian brother, died in the Salesian compound that houses the National School of Arts and Trade, along with as many as 500 students at the school.

The Salesians also reported Jan. 15 that they had lost two of their young members in formation when the St. Francis de Sales Institute in Port-au-Prince was destroyed.

The Spiritan Fathers and Brothers, who run the center, said Jan. 15 that they did not know exactly how many students were inside when the quake hit or how many students had died, but the Oblates of Mary Immaculate informed them that one Spiritan student was dead. One Oblate also was killed.

The Montfort Missionaries reported that eight of their students died at the religious formation center and that Montfort Father Jean Baptiste Henri, the novice master, died when part of the Montfort guest house crumbled.

The Montfort Missionaries have been in Haiti since 1871 and had a dozen communities with about 50 priests and more than 20 seminarians.

The Daughters of Wisdom, a religious order that is part of the Montfort family, confirmed that three of its sisters died in the collapse of the Spiritan-run center’s building, Vatican Radio reported Jan. 18. Another three sisters remained under the rubble and were believed dead.

Holy Cross Father Michel Eugene, provincial superior of the Haiti province of the Congregation of Holy Cross, said in a report to the congregation that the quake had destroyed the Holy Cross school, Ensemble Scolaire Basile Moreau, and provincial house in Haiti.

One Holy Cross seminarian, who was not named, was killed while taking a course at Quiqueya University, which did not survive the quake, Father Eugene said.

Three members of the Viatorians were injured when their retreat center collapsed, killing the center’s receptionist.

A Dominican Sister of Charity was injured, and the Redemptorists reported only one priest injured when the Church of St. Gerard fell.

The Christian Brothers reported that all its members in Haiti were uninjured.